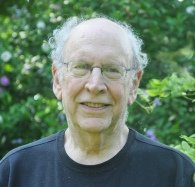 Bruce Bennett was born in Philadelphia, Pennsylvania, in 1940. He received his A.B., A.M., and Ph. D. from Harvard, and taught at Oberlin College from 1967-70, where he co-founded and served as an editor of Field. In 1970 he moved back to Cambridge, where he co-founded and served as an editor of Ploughshares. In 1971, he married Bonnie Apgar, a Renaissance art historian, and for two years he and Bonnie lived in Florence, Italy. In 1973 he began teaching at Wells College in Aurora, NY. He and Bonnie have two children, Evan and Millicent. Evan is an architect and Millicent is an editor, and both live with their families in New York City. Bruce is the author of ten books of poetry and more than thirty poetry chapbooks. His New and Selected Poems, Navigating The Distances (Orchises Press), was chosen by Booklist as “One Of The Top Ten Poetry Books Of 1999.” He was awarded a Pushcart Prize in 2012 for his villanelle, "The Thing's Impossible," which appeared in Ploughshares. Just Another Day in Just Our Town, Poems: New And Selected, 2000-2016, was published by Orchises in January 2017, and has gone into a second printing. At Wells Bruce taught British and American Literature and Creative Writing, directed the college’s Visiting Writers Series, which over the years brought hundreds of writers to campus for readings, workshops, and residencies, was long-time Chair of the English Department, and in 1993 helped to found the Wells College Book Arts Center, where he still serves as Director of Wells College Press. Wells Press has published numerous poetry books, chapbooks, and pamphlets, as well as letterpress broadsides by writers in the Visiting Writers Series. The Book Arts Center also holds an annual national chapbook contest. Bruce retired in June 2014, and is currently Professor Emeritus of English. During the 1980's and 90's, he was an Associate Editor at Judith Kitchen's State Street Press in Rochester and Brockport, NY. He has reviewed contemporary poetry books in The New York Times Book Review, The Nation, Harvard Review, and elsewhere, and his poems have appeared widely in literary journals, textbooks, and anthologies. In 2015 he received the first annual Writing The Rockies Lifetime Achievement Award for Excellence in the Teaching of Creative Writing, which was presented at the Writing The Rockies Conference at Western State Colorado University in July 2015.