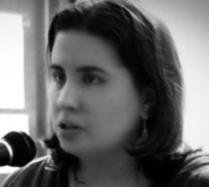 Bonnie MacAllister is a multimedia performance artist and playwright. She is currently showing work at Boricua College in New York. Her play, “Tapped” will be produced by Green Light Arts in “The Dressing Room” for the Philadelphia Fringe Festival at the Plastic Club in September 2011. She was recently published by Hoax and Pink Noise, and she has three films forthcoming in Survey 0014 by ClassWarKaraoke.com.

Bonnie staged her plays "She Should Have Written It at the Shubin Theatre in Philadelphia in March 2011 and "Crowning the May Queen" in the 2010 Fringe Festival as part of Green Light Arts' "The Waiting Room." She recently staged and starred in her play "Silks and Satins, Linens and Roses" at the New Light festival in Philadelphia.

She is an active member of the Young Women's Caucus, Philadelphia, and DC chapters of the Women's Caucus for Art through whom she has exhibited in United Nations sponsored shows, partnered with Rubia to create a collaborative project quilt with Afghan women that toured the United States, and shown work in such venues as the Philip Ratner Museum, Tacoma Park Municipal Building, Wilmington's Louis L. Redding City/County Building, International House, Holy Family University, High Wire Gallery, Penn State, and the Plastic Club. Though group and solo exhibitions, she actively fundraises for Girls Gotta Run Foundation which sponsors Ethiopian girls' running teams, one of which she met in Ethiopia.

Bonnie began her career as a production assistant at the Philadelphia Museum of Art where she worked on in house films on exhibitions and for the education department. She received her B.A. in English-French-Women's Studies 1999 from Albright College and her M.Ed. with dual certification in English and French from Temple University in 2008. She studied under Jacques Derrida, Agnes Varda, and Helene Cixous at the Universite de Paris Sorbonne and Centre des Etudes Feminines from 1997-98.

Gives readings:
Yes
Travels for readings:
Yes
Prefers to work with:
Any
Fluent in:
English, French
Born in:
Doylestown
Raised in:
Philadelphia, PA
Pennsylvania
Please note: All information in the Directory is provided by the listed writers or their representatives.
Last update: May 16, 2014
X