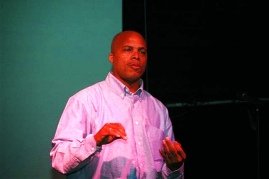 Bilaal Muhammad, a native of Philadelphia, currently living in St. Marys, GA. A poetically skilled poet who constructs monuments with his words, and he proudly carries the torch of activism. Since embracing the spoken word scene in 2001 he has been a force with his information filled poetically charged tirades. He is currently employed by the City of St. Marys as the City Marshal which makes Bilaal an interesting poet.

Bilaal is a staunch advocate against injustice and his mission is to utilize his words to activate the masses to make change. Bilaal believes that spoken word poetry is the epitome of the performing arts. He uses the various poetry venues as his stage to address the many issues that affect the black community so he stands in the cross hairs with the microphone as his armor.

He is the host of The Poet’s Venue, sponsored by Taro’s Coffee House, an Open Mic Series for Poets, Lyricist, Musicians, etc. held on the third Satuday of every month at 8:00 PM to 10:00 PM.

He has authored The Humble Poet, a collection of poems and the producer two spoken word CDs, P.O.E.T. and Echoes of a Torn Soul his debut CD that is available by contacting Bilaal

What I'm reading now:
Troubled Soul Refinery by Taalam Acey, Sex At Noon Taxes by Sally Van Doren, The Woman Who Isn't Was by Ainsley Burrows