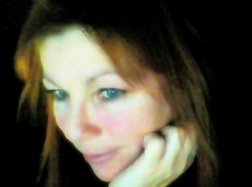 Nominee for Best Of The Net 2014, author Alicia Winski, of Seattle, was born and raised in Southern CA. Having lived many of her formative years in several beach areas such as Venice, Playa del Rey and Malibu, California, she developed an early affinity for water and often incorporates that affinity, along with her love of music and color, into much of her writing.

Despite the fact that she grew up in a writing atmosphere, Winski never aspired to write herself, dreaming instead of a singing career. In fact, when a palm reader predicted a future in writing for her, Alicia spent her teenage years studiously avoiding the vocation. However, the gypsy's prediction came true years later when Winski found herself picking up a pen in a struggle for lucidity after a long struggle with panic disorder developed in 2002. She has yet to put her pen down.

Her work has been featured in numerous publications, and her first poetry collection, "Running On Fumes", was published in early 2010, with a second, "Naughty Girls Dream In Color", and third collection, "of dreams & mortality", in the works.

Winski, cut her teeth on publishing as one of two editors for small press, Edgar & Lenore's Publishing House. While there, Winski brought to the literary table, eight titles, including Amazon's #1 best seller, "In The Company of Women, An Anthology of Wit & Wisdom, Sass & Class" and "Men In the Company of Women, An Anthology of Praise & Persuasion", released in February of 2013 where it remained #1 on the Amazon charts for best selling men's anthology. Winski, as Editor In Chief at NightWing Publications, has recently edited and released, "harmonies & discords" by Cristina Umpfenbach-Smythe, "Photo Ku" by Rich Follett, "...and it happened under cover", an anthology of sensual poetry and short stories and "Dancing On Broken Glass" by Barbara H. Moore (Sept 2014).

In her own writing, Alicia Winski brings a fiercely honest approach to poetry in a unique voice, and with her work published nationwide and internationally, she continues to astound readers world-wide.

Gives readings:
Yes
Travels for readings:
Yes
Prefers to work with:
Any
Fluent in:
English
Born in:
Hollywood, CA
California
Raised in:
Malibu, CA
California
Please note: All information in the Directory is provided by the listed writers or their representatives.
Last update: Sep 26, 2018
X