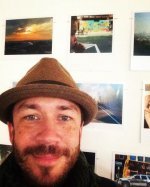 Aaron B. Jackson is the author of Dogetry. He has been published in over fifty publications and he is the former Poet Laureate of Jersey City, NJ. His poems have appeared in The Bark Magazine, San Francisco Peace And Hope, Like One: Poems for Boston and Scripting Change: Seeing Past Sickness. His poetry has been exhibited in Finland’s Pori Art Museum as part of a multimedia collaboration with photographer Chi Modu and motion artist Jan Tompkins and he has twice been the recipient of grants from the Puffin Foundation. Jackson has written and starred in an ad campaign for the Partnership for a Drug Free America and he also served as a poetry judge for the Connecticut Office of the Arts and the Jersey City Independent. Currently he lives with his family in Albuquerque, NM and is the store manager of Bookworks. For more information visit aaronbjackson.com.

Gives readings:
Yes
Travels for readings:
Yes
Identifies as:
Mixed-Race
Prefers to work with:
Any
Fluent in:
English
Born in:
New York, NY
New York
Raised in:
Burlington, VT
Vermont
Please note: All information in the Directory is provided by the listed writers or their representatives.
Last update: Nov 19, 2022
X