Today the Whiting Foundation announced the winners of its 2019 Literary Magazine Prizes, the largest national awards given to nonprofit literary magazines. The awards honor organizations that actively nurture “the writers who tell us, through their art, what is important.” As well as acknowledging excellence, the prizes are intended to help publications reach new audiences, find new sources of revenue, and grow towards sustainability. The foundation also revealed that the caliber of this year’s entries inspired the judges, who served anonymously, to award two additional development grants to magazines with very small budgets, in recognition of the crucial role these publications play in nurturing writers early in their careers. 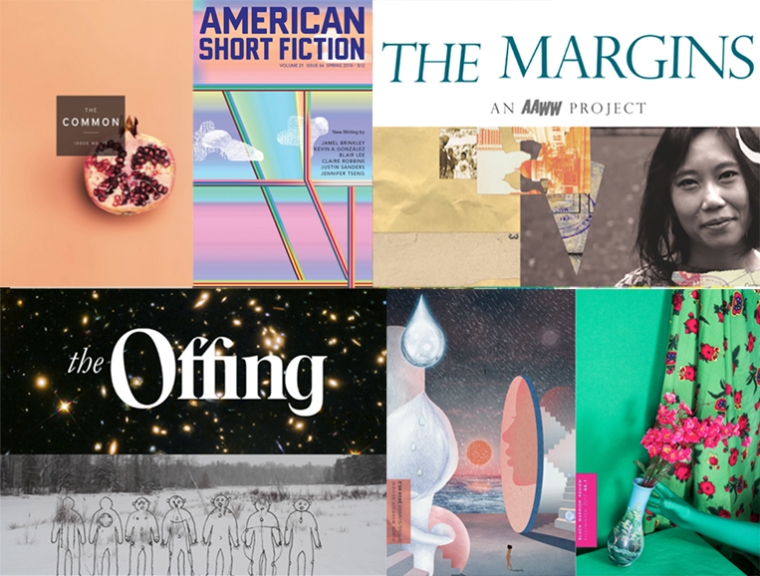 The winners of the 2019 Literary Magazines Prizes are (clockwise from upper left) the Common, American Short Fiction, Margins, the Black Warrior Review, and the Offing.

The largest monetary prize—$60,000 for a print publication with a budget of $150,000 to $500,000—was awarded to the Common, a print and digital literary journal at Amherst College in Massachusetts that is focused on the idea of place. The judges commented: “The Common’s exemplary resources for teachers and its devotion to elevating new writers will help bring into being a new generation of readers and thinkers.”

In the category of print publications with a budget under $150,000, the $30,000 award went to American Short Fiction in Austin, Texas. “Budding talent appears in company with venerated masters, and the magazine’s deep investment in its Austin community gives it a strong foundation for creating national resonance,” the judges noted.

The $30,000 prize for a digital publication was awarded to the Margins, the editorial arm of New York City’s Asian American Writers’ Workshop. The judges described the Margins as “an indispensable incubator for audacious intellect and human complexity.”

The foundation awarded its two new development grants to Black Warrior Review and the Offing. The $15,000 print development grant went to Black Warrior Review of Tuscaloosa, Alabama, commended by the judges as “a singular beacon for adventurous writing.” The $9,000 digital development grant went to the Offing, an online publisher of creative writing and art operating out of Seattle. “The magazine’s vibrancy is due in no small part to its unswerving commitment to amplifying marginalized voices, and its sharp but compassionate understanding of what writers need to thrive,” said the judges.

The Whiting Foundation dispenses the award money to each magazine over the course of three years: as an outright grant in the first year and as matching grants in the second and third, which helps the magazines fund-raise. The foundation also offers the winners expert advice in tackling challenges such as fund-raising and marketing, and helps winners form a cohort that will convene several times a year to discuss shared challenges and opportunities.

The foundation noted that the 2019 winners reflect not only the broad geographical range of literary publishing today, but also the crucial role independent magazines play in supporting writing beyond the page. Of this year’s winners, one magazine develops educational tools for high-school students and teachers; another offers vigorous community support for Asian American writers. Some of the winning magazines give voice to incarcerated writers; some provide significant space for literature in translation. Several build and connect readership through robust literary programming.

“We and the judges were astounded by the creativity on display in this year’s applications—not simply in the writing they discovered and the careers they fostered, but in the conception and concerns of the magazines themselves, which are so much more than the sum of their parts,” said Courtney Hodell, the Whiting Foundation’s director of literary programs. “There is no question that these publications are the incubators of much that is exciting and vital in American literature.”

Three Whiting Literary Magazine Prizes totaling up to $120,000 will be given annually for print and digital publications. The new awards program is intended to support both “nimble upstarts as well as established journals.”