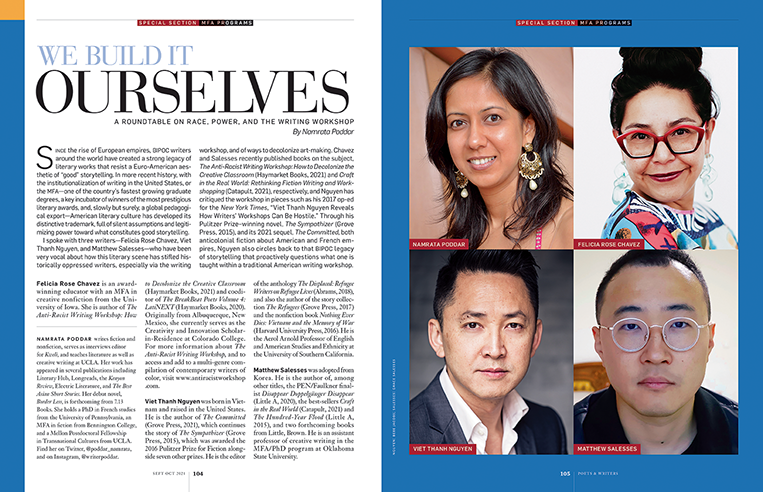 Although I can be identified by pretty much all the attributes of white masculinity listed by Namrata Poddar in “We Build It Ourselves: A Roundtable on Race, Power, and the Writing Workshop” (September/October 2021)—“cis, straight, able, upper or middle class, Western, Judeo-Christian”—I never thought they added up to my feeling part of any collective experience of whiteness in the workshops I’ve participated in. My first workshop took place at night after work, in the basement classroom of a church, where we squeezed ourselves into desks made for primary school students and read our weekly assignments in subdued and quavering voices. A lot of us were white, some of us weren’t, the masculine contingent was vastly outnumbered, and all of us were afraid. Our instructor, an accomplished writer, wrote on my final submission that I might have something publishable if I really put myself to revising it, but she didn’t give me—or anyone else—any formula for that other than just doing the work, and it wasn’t until years later and still more workshops that a small literary journal accepted my effort at a short story. I don’t remember any feelings about race or heritage at that point, unless you want to count my recalling Hemingway’s counsel about writing just one true sentence—the first step outward for a writer, toward whatever may exist as universal.
David Menninger
Murrieta, California

William Oppenheimer (Reactions, September/October 2021) makes a good case for informing clients who self-publish that they should consider the funds they are using to be expendable. I should know; I have self-published four such books and have little to no money to show in return. One book I wrote was a medical terminology book that I taught from, and actually a copy is sold now and then even after many years. But to say that financial return is the only thing that authors wish for would be a mistake. At eighty-eight, with medical problems, I wish only for the infinity of cyberspace to perpetuate my work, for I shall not be around to see a hundred. As Emily Dickinson once wrote, “If fame belonged to me, I could not escape her – if she did not, the longest day would pass me on the chase – and the approbation of my Dog would forsake me….” I do not know if my work is great, or even mediocre, but I do know that there is something there worth something for someone—maybe not today, but who knows anything about the future. My funds may have been expendable, but the enjoyment of writing is worth experiencing.
William J. Russell
Ukiah, California