Postcard From the Pandemic: Blue Gloves and the TSA

A box of galleys for my new novel arrived today. The novel, due out from SUNY Press in October, is titled In Security, but I didn’t take any special safety precautions when the brown-uniformed, blue-gloved UPS driver handed me the box. I thanked him and asked how he was doing. “Hanging in there,” he said, keeping his distance, hustling back down the stairs toward his idling truck. 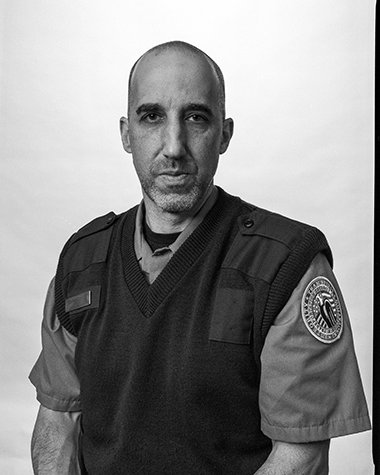 The author during his time with the Transportation Security Administration in 2012.

My novel’s main character is a Transportation Security Officer (TSO) who works for the Transportation Security Administration (TSA) at Albany International Airport here in upstate New York. I’ve been teaching at the University at Albany, SUNY, since 2001, but back when I was struggling to write the novel, I also took a job with the TSA at Albany International. For a few months in 2012, I was a TSO in training. I worked the 5:00 AM to 9:00 AM shift at the airport’s checkpoint, five days a week, and then I’d change out of my uniform and, a little more tired than usual, head to campus for my day job.

Those were the weeks of Hurricane Sandy, Halloween, Obama’s re-election, Thanksgiving, the run-up to a new year. Morning after morning, just before I hit the checkpoint, I slipped on the same sort of blue latex gloves the UPS man was wearing when he handed over my box of galleys.

I wasn’t worrying about viruses when I put on those gloves. I wasn’t worried about catching something that could kill me and/or my family. I was focused on trying to learn basic, standard operating procedures. How to search carry-on baggage. How to check boarding passes and IDs. How to swab palms for traces of explosive material. How to perform a pat-down.

I haven’t worked the job in years, but I remain a TSA news junkie, and I still linger around checkpoints when I travel. During this pandemic, though, I’ve found myself thinking even more than usual about the people I worked with at the airport and the gloves we wore. The fundamental premise of the job, repeated at every briefing, visible on the posters in every office, lounge, classroom, was that our duty was to keep people safe. We were supposed to identify threats while simultaneously creating calm. And yet, this was 2012, and no matter how often the higher-ups reminded us that many of the 9/11 terrorists had started their fateful day at airports smaller than ours, we didn’t really feel that our lives were in danger. The worries I heard voiced on the job concerned changing shifts, getting promoted, requesting transfers, and passing various tests. Worries about moving up, moving on. Yes, there were plenty of terrifying incidents in airports between 2001 and 2012, and we were well aware of them all, but they didn’t stop us from feeling safe while we were busy keeping other people safe.

It can feel as if a lifetime has passed between 2012 and now. I despaired about more than a few things in those intervening years. I spent, for instance, far too much time anxious about the fate of a novel that seemed forever in progress. Still, I kept at it, and as I did, gradually, long before 2020 and our current crisis, my priorities shifted. My perspective changed. Short version: My brother died, some friends and colleagues died, my son kept growing up. The long version of all that probably deserves its own essay.

Don’t get me wrong: I’m still invested in the new novel and I felt proud when I opened that box and saw the cover with my name on it. But in this anxious time, as the death toll from the pandemic rises, my thoughts shift to those people—the real-life workers, like those I got to know at the checkpoint—who hold down low-paying, thankless jobs despite the scorn regularly heaped upon them. They are people who perform simple, ordinary acts of heroism day in, day out. They put the blue gloves on, take them off, then put them back on again.

Edward Schwarzschild, a recent NYFA fellow in fiction, is the author of Responsible Men and The Family Diamond. At the University at Albany, SUNY, he is director of creative writing and a fellow of the New York State Writers Institute.

Postcard From the Pandemic: Turning Fifty-Three in Indiana
by Stacy E. Holden | Postcard 4.6.20

On the occasion of her birthday, a writer finds a new perspective on life’s frailty during the coronavirus pandemic.

Postcard From the Pandemic: Space as a Blanket for Well-Being
by Ginger Gaffney | Postcard 3.26.20

A horse trainer and author of a memoir, Half Broke, contemplates silence, distance, and the language of our bodies during a pandemic.

Postcard From the Pandemic: Doing Time in Hong Kong
by Kaitlin Chan | Postcard 3.26.20

A writer and illustrator in Hong Kong contemplates the lack of social interaction during the coronavirus pandemic.

Postcard From the Pandemic: Zoom Teaching
by Nina Schuyler | Postcard 3.23.20

An adjunct professor at the University of San Francisco writes about transitioning to online learning after her physical classroom was closed.