On a calm corner in lower Manhattan, light bounces off the Hudson River and in through the glass walls of Poets House, a seventy-thousand-volume poetry library and national literary center. This summer marks the twenty-fifth anniversary of the Poets House Showcase, an annual exhibit featuring poetry published in the United States in the previous year. “Our first showcase in 1992 displayed eight hundred works, which at the time I considered a huge number,” says Lee Briccetti, longtime executive director of Poets House. Twenty-five years later, that number has nearly quadrupled: The current showcase displays approximately 3,600 poetry collections, chapbooks, broadsides, anthologies, and other poetry-related texts published in the U.S. over the past eighteen months. 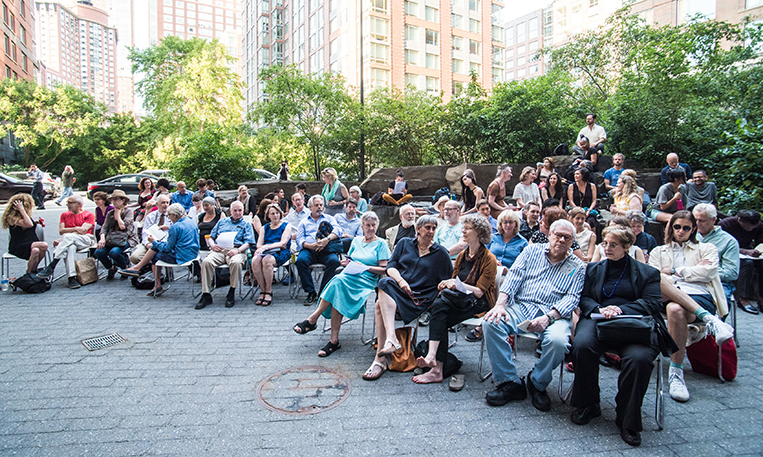 The audience gathers for the opening reception of the Poets House Showcase and reading with Marie Howe, Ishion Hutchinson, and Hoa Nguyen on June 22, 2017. (credit: Nicola Bailey)

Free and open to the public, the showcase, which opened June 22 and runs until August 26, serves as a testament to poetry’s vitality. “There is no other event like this that celebrates the whole capacious choir of American poetry in print,” says Briccetti. Each work faces forward on shelves lining the library, producing a vibrant depiction of the book as art object, as well as a comprehensive picture of the poetry of our time. Instead of alphabetical organization, the exhibit is ordered by press, with more than seven hundred publishers represented. This particular arrangement is both aesthetically pleasing and practical: “It’s a way to emphasize what each press currently does so practitioners can get a better sense of the poetry publishing landscape,” says Briccetti, who adds that locating every poetic work published in the country requires extensive research. “Putting the showcase together is a year-long research project,” says Poets House librarian and archivist Amanda Glassman. “We seek books from publishers of all kinds and sizes [including commercial, university, and independent presses].” The endeavor is often serendipitous: “Books land on our desk that we wouldn’t otherwise know about.”

Noteworthy projects and events commemorating the anniversary include a showcase reading series; the 5X5 project, in which five poets—Kyle Dacuyan, Lynn Melnick, r. erica doyle, Paolo Javier, and sam sax—each recommend five books from the past twenty-five years of the showcase; and a pop-up art show. Located in the atrium adjacent to the library, the pop-up show pays homage to showcases past, displaying rare works and ephemera from previous years. “The pop-up show spotlights special items [from the showcases] that people don’t seek out as much,” says Reginald Harris, the center’s director of library and outreach services who, along with Glassman, curated and catalogued both the showcase and pop-up show. Signed editions, artist books, and poetry printed in unique formats—such as a vellum-bound edition of Mark Doty’s collection An Island Sheaf and an accordion-fold book of poems by Frank Sherlock tucked into a miniature painting by Nicole Donnelly—complement the showcase and honor the ongoing dialogue between poetry and visual art. 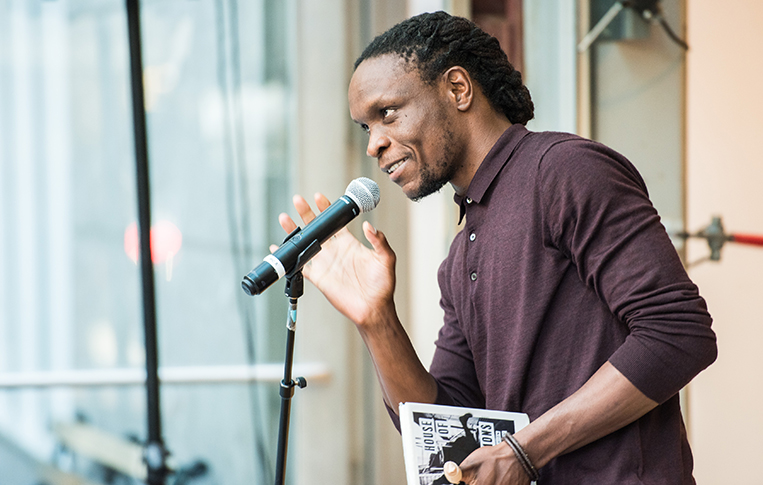 With twenty-five successful years of showcases under its belt, Poets House has even more to celebrate, as the library’s thirtieth anniversary continues until the end of the year. Founded in 1985 by U.S. poet laureate Stanley Kunitz and poet and arts administrator Elizabeth (Betty) Kray, the first library opened inside of a public New York City high school in 1986. From humble beginnings, Poets House moved to its permanent residence in Battery Park City—an eleven-thousand-square-foot eco-friendly space—in 2009. The multiuse space has allowed the organization to expand its offerings, including workshops, master classes, and class visits for children. Poets House attracted eighty thousand visitors in 2016.

In addition to planning next year’s showcase with Briccetti, Glassman and Harris are currently digitizing a chapbook series that was published from the 1950s to the 1970s, with the objective to save and “place these works into an interactive context,” Briccetti says. “Digitization is a way for people who cannot visit Poets House to [explore] the library’s resources.”

Briccetti and her team’s passion in creating a nurturing space for poetry demonstrates the ancient form’s persistent societal relevance. “America is in a golden age of poetry production,” Briccetti says with a smile. The Poets House Showcase is a living record of this golden age, a testament to poetry’s lasting influence and importance.

Caroline Davidson is the assistant editor of Poets & Writers Magazine.

Executive director of Poets House Lee Briccetti talks about the relocation and expansion of the country's largest poetry library.