As tired as I am of hearing April lamented as “the cruelest month”—thanks a lot, T. S. Eliot!—the phrase rings true in Boston, where spring doesn’t begin until late May. After a line of thunderstorms left the sky gray and the temperature hovering in the raw forties, how warming it was to spend last Saturday attending one of Boston’s best-known literary events: the Boston National Poetry Month Festival. 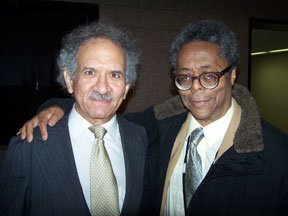 Now in its ninth year, the free, daylong event is actually a marathon reading featuring more than fifty established and emerging poets, and is the unofficial kickoff to National Poetry Month in the greater Boston area. The festival was founded by poet Harris Gardner, who also runs a local poetry series called Tapestry of Voices, in conjunction with Kaji Aso Studio: Institute for the Arts and the Boston Public Library. The readings were held in three different rooms in the library’s Johnson Building, in downtown Boston’s Copley Square: Poets took the stage in the main auditorium for concurrent ten-minute readings as well as in a smaller, more intimate adjacent room, while open-mike participants were given a space of their own.

If poetry is seen as inaccessible and exclusive, then someone forgot to tell the six extraordinarily talented high school students from Boston Latin High School, Boston Arts Academy, and the Walnut Hill School for the Arts, whose readings launched the event at 10 AM. “With the addition of high school students to the event, it encourages them to read, it encourages them to write and participate,” poet and featured reader Regie O’Gibson commented. “There’s really nothing quite like this event in Boston.”

Exposing local residents to poetry has been the mission of both this event and Boston’s first and current poet laureate, Sam Cornish, who led the formal portion of the program with a ten-minute reading. He ushered in a lineup that featured Charles Coe, Kate Finnegan, Timothy Gager, Harris Gardner, Valerie Lawson, Frannie Lindsay, Ryk McIntyre, Elizabeth McKim, Ifeanyi Menkiti, Diana Saenz, Gary Tucker, Afaa Michael Weaver, and Richard Wollman, among other Boston-area poets.

One of the things that made this event truly enjoyable was the relaxed atmosphere of the day. I slipped from one venue to the next to listen to a favorite poet or discover someone new. Just about all the writers, at some point, could be found near the book table outside of the auditorium—not behind the table selling books, but standing in front talking with readers and colleagues, laughing, and promoting upcoming events. José Gouveia talked about his plans for the Provincetown Poetry & Literary Arts Festival that will take place in Cape Cod later this month. Two other poets discussed promoting their events on Facebook, while a few folks talked about new and recent titles from the Somerville-based Ibbetson Street Press, run by event host Doug Holder. It was nice, also, to see established poets sitting in on the open-mike reading to support beginning writers from the community.

In one of the rooms hosting the featured poets, I listened to Dick Lourie recite poems about the Mississippi Delta while wearing a black biker vest with poet emblazoned on the back in hot pink embroidery. When he got up to read, he told the audience, “I don’t know why more poets don’t have one of these!” I also had the pleasure of being reintroduced to Afaa Michael Weaver’s factory poems. He read three of them from Multitudes (Sarabande, 2002), a book that was informed by his years as an industrial worker in Baltimore. In another reading, by Susan Donnelly, I was enchanted by a poem about Boston’s Rose Kennedy Greenway, and fellow audience members nodded in affirmation of Donnelly’s references to the city’s other unique features. Yet it was her closing poem, “Aretha Franklin’s Hat,” about that remarkable bow-adorned cloche that the Queen of Soul wore at president Barack Obama’s inauguration, that garnered the most cheers from the crowd.

By the event’s close at 4 PM, roughly three hundred people had cycled through the festival. “I think poetry is thriving in Cambridge, Boston, and the suburbs,” Gardner said. “Poetry is very much alive and well. I do this particular event, though, because it brings the community of poetry together as well as allows for interaction with the community and neighbors at large. And I hope the arts can unify the neighborhoods into one large, extended community.”

During this so-called cruelest month, in these tough economic times, poetry and art serve a significant role in lifting a society. As program consultant and featured reader Lainie Senechal commented, “Festivals like this are very important to the city, to the community, and to the people. I’m very dedicated to the festival because this is what we should be doing. This is the best we can do.”

Reports of [poetry's] death have been greatly exaggerated, to steal and alter Mark Twain's quote. When I see stories like this, I am hopeful for poetry's future. I hope in the absence of a 2010 Dodge Poetry Festival, that more and more local festivals and readings will emerge to fill the void.
Harris Gardner should be commended for his efforts the past nine years. He is a tireless promoter of poetry in the Boston-area. I have read, hosted, written articles in my column in The Somerville News ( about the festival), and helped with the booktable every year, and it has been great....every city should have one! Doug Holder/Ibbetson Street Press
X