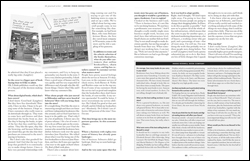 Thanks for recognizing the great work Daniel Goldin is doing at Boswell Book Company ("Inside Indie Bookstores: Boswell Book Company in Milwaukee" by Jeremiah Chamberlin, July/August 2010). Goldin should be recognized for another thing: his enthusiastic support of local authors. Having published three books myself, I know personally that he takes a great interest in what we are doing, inquires about our progress in writing, and makes the store available for our readings. Milwaukee is proud to have Boswell, and we hope it has a long and prosperous life.
PAUL SALSINI
Milwaukee, Wisconsin

THE MEDIUM IS THE MUSEUM
I read the Editor's Note about advances in digital media (July/August 2010) with a mixture of interest and dismay. The day the magazine arrived I had just borrowed a battered copy of Steinbeck's East of Eden. This particular book had journeyed from a library in Florida to ours in New Hampshire, and it was clear that it had a life prior to my reading it—evidenced by stickers on the inside cover attempting to hide the word withdrawn, scribbles on the edges, and the corner of a granola bar wrapper used as a bookmark. The written words are the art, but the physical book is the museum.

I love books—the kind that, when you open them at a yard sale table, souvenirs from someone else's life flutter out like freed birds, the kind that get passed around among friends and family. Call me archaic, but I love this sense of connection with other readers through our books.
PATRICIA FRISELLA
Farmington, New Hampshire

POWER LINES
I enjoyed the article "Necessary Agent" by Jofie Ferrari-Adler (July/August 2010), not having realized how little power editors have. I appreciate that good agents like Molly Friedrich are there to help authors by building strong relationships with publishers and editors. I hope when the time comes, I get an agent like Molly.
Excerpted from a comment posted on pw.org/magazine by JESSIE MAC

I used to be an editor at Simon & Schuster, and I can attest to Ferrari-Adler's point that editors—unless they are very senior—are pretty much powerless. This may not be what writers want to hear, but it is what they need to know. Thanks to Ferrari-Adler for saying what needs to be said.
Excerpted from a comment posted on pw.org/magazine by MARCELALANDRES

RENOVATION VERSUS DEMOLITION
I was saddened by Benjamin Percy's article "Home Improvement: Revision as Renovation" (May/June 2010). While he deserves to be proud of finishing his novel, The Wilding, the degree to which Graywolf Press editor Fiona McCrae suggested changes to his book is disturbing. In reading about his conversations with the editor, I was reminded of something Orson Welles once said in regard to the editing of a film: "If there's something another fellow can or should add to your picture after you've made it, then it doesn't seem to me that you're really in command of your own work." It's interesting to me that this article appeared in the same issue as a discussion on self-publishing, "Self-Publishing Steve: Part 1—The Dream Begins" by Steve Almond. Despite the dubious quality of some self-published books, at least those writers can say the work is theirs, both the good and bad parts.
TODD MICHAEL COX
New Prospect, Wisconsin