FIRST OF ALL…
I receive and benefit from a number of magazines for writers—Poets & Writers Magazine being my favorite. Recently, however, my status as happy subscriber has become tenuous because of a certain trend that I find disturbing—exemplified by, though by no means restricted to, "First Things First: The Fifth Annual Debut Poets Roundup" by Kevin Larimer (January/February 2010). I noticed that all twelve profiled poets hold graduate degrees in creative writing. While my aesthetic sensibilities are not entirely inhospitable to such programs and the parchments they purvey, I'm afraid the 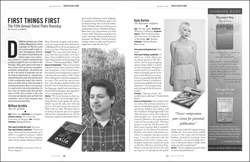 ubiquity of ordained writers as representatives of the craft is disturbing and, for me, distasteful. And I doubt I am alone in these sentiments. In fact, I presume that a good portion, if not a majority, of subscribers are aspiring, uncredentialed writers. The point is this: How truly inspiring to such writers are the conquests (read publishing credits) of the duly degreed minority? Because the message is this: If you are busy raising children, do not query. If your mother's illness has kept you from graduate school, busy your pen otherwise. If you think life itself, its redolence and noise, its passion and ennui, its earths and stars, are sufficient qualifications for the life poetic, well...have you read our magazine lately? More disturbing still is the realization that neither coincidence (which is benign) nor editorial discrimination (which is healthy) can account for the trend itself. That all your debut poets just so happen to have a competitive advantage in the publishing market is only symptomatic—a function of the same market's being supersaturated by graduates of the plenitude of programs that confer such an advantage in the first place. Have we permanently situated higher degrees as the only stepping-stones to success as a writer? Should the busy mother, the dutiful son, and the wide-eyed wanderer just forfeit, wave their pitiful manuscripts like white flags, and get back to making the world go around? Well, since I put it that way, maybe it's for the best.
JONATHAN SCOTT
Birmingham, Alabama

BEYOND BELLY DANCING
I found "Beyond Words: Five Writers Who Practice Other Arts" by Suzanne Pettypiece (January/February 2010) an enjoyable and invaluable read. In addition to writing fiction and poetry, I have practiced the art of belly dance for the past three years. Time and again I emerge from the dance studio and return to my writing to find that dance informs and strengthens my primary craft. Often this happens in subtle, meditative ways I cannot pinpoint, but lately I've noticed the more overt influence of dance on my writing. I've come away from dance practice thinking about negative space, repetition with variation, rhythm, persona—but from a fresh angle that I wouldn't be able to access by simply writing.
VANESSA BLAKESLEE
Maitland, Florida

I really enjoyed the way Pettypiece shed light on the often-overlooked fact that many writers have almost "secret lives" in other artistic disciplines. One discipline missing in this go-round, however, is music. Aside from the Rock Bottom Remainders—the band of literary stars, including Stephen King, Amy Tan, and Dave Barry, that performs for fun and charity—there are many writers who maintain a dialogue between their fiction and music.
ROBERT MORGAN FISHER
Woodland Hills, California

ONLINE AND UPWARD
I was glad to see Kevin Nance covering the transition happening at TriQuarterly ("A Tough Transition for TriQuarterly," January/February 2010). I don't disagree with his conclusion that the venerable print magazine was folded by Northwestern University due to economic factors, and that for some reason the university chose to spin it as a positive move that denotes progress without recognizing loss. That said, Nance's article didn't explore what many are trying to do to salvage the situation and to ensure that the online version of TriQuarterly is as much an opportunity as possible, rather than a "catastrophe," as Edward Hirsch calls it. Part of the reason that the situation is being seen only in its bleakest light is that no one seems to be digging beyond the agitating statements of the university librarian—who has, really, nothing to do with TriQuarterly—and the press release of distanced university officials. Meanwhile, as the faculty supervisors for the new online incarnation, Susan Harris and I have dedicated ourselves to preserving as much of TriQuarterly's legacy as possible. For example, we have initiated an archive project that will rerelease many of the valuable pieces the journal has published over its long history. We will be working to train the new editors of the magazine to ensure that TriQuarterly Online remains a quality publication showcasing the best of experimental and traditional writing from the United States and abroad. Nance's article did not mention that Harris was formerly the director of Northwestern University Press, that I have been an editor for more than fifteen years, or that Reginald Gibbons, himself the longtime editor of TriQuarterly prior to Susan Firestone Hahn and Ian Morris, has been supervising us in our efforts. Those most closely affiliated with the magazine's transition are not those who made the call to fold it, but fellow editors and writers who are deeply committed to making the very best of a tumultuous situation for the sake of ongoing literary culture. While we are all saddened and angered by the way economic powers devalue literature and those who work in its trenches, I have hope that TriQuarterly Online can indeed engage readers into future generations while being less reliant on deep institutional pockets thanks to its new, more economically streamlined forum.
GINA FRANGELLO
Evanston, Illinois

COVER LINES
I just received my January/February 2010 issue in the mail and had to write—fabulous cover. I haven't been this wowed since your July/August 2008 cover of Marilyn Monroe reading James Joyce in a park. I just love a bit of nostalgia mixed with the unexpected.
D. EUBANKS
Greenville, South Carolina

WHY WE WRITE
I'd honestly thought to give up writing before I read Cecilia Ward Jones's "Why We Write: The Art of Perseverance" (January/February 2010). I taped it to the wall next to my computer; it imbues me with hope.
AUDREY JAY
Kingman, Arizona

HIP TO BE SQUARE
Thank you for Jeremiah Chamberlin's wonderful article about a magical place ("Inside Indie Bookstores: Square Books in Oxford, Mississippi," January/February 2010). As a book publicist, I am a huge fan and booster of independent bookstores. Square Books has a special place in my heart and I leap at every opportunity to travel with my clients when we have an event in Oxford.
Excerpted from a comment posted on pw.org/magazine by JULIE SCHOERKE

THE AUDACITY OF LISTS
I was disappointed with "Fifty of the Most Inspiring Authors in the World" (January/February 2010) when I saw that Barack Obama was the grand finale. Have some respect for the art of writing and the people who actually devote themselves to the craft. When evaluating literature the question must be what is written not by whom.
STEVE MILLER
Manhattan, Kansas

I find this list distressing, and not only because I don't agree with every name on it (or every name left off). I don't think Poets & Writers Magazine should be promoting contention in this manner. Moreover, the squibs attached to the names reveal some pretty punk values, in my opinion. Frederick Seidel knows how to spend money: That's a recommendation? I know quite a few poets smarter than Anne Carson. And so on. This is just ridiculous and depressing, because if this is what Poets & Writers Magazine has come to, it's a sign of how deeply sunk is the entire literary enterprise.
Excerpted from a comment posted on pw.org/magazine by KCHERRY

[CORRECTION]
The name of the store adjacent to Square Books in Oxford, Mississippi, was misspelled in "Inside Indie Bookstores" (January/February 2010) by Jeremiah Chamberlin. The store is Neilson's Department Store.