Let the Earth Stabilize You: Postcard From New York City

On Monday evening Aracelis Girmay and U.S. poet laureate Joy Harjo read from recent work at the 92nd Street Y in New York City. But before either poet took the stage, Ricardo Alberto Maldonado, managing director of the Unterberg Poetry Center, read excerpts of poems written in response to the poets by high school students who participated in the Christopher Lightfoot Walker Literature Project, which brings New York City high-school students to the Center to meet with writers prior to their appearance. The brief but poignant selections, which explored questions of family, displacement, immigration, and home, set an intimate tone for the evening. 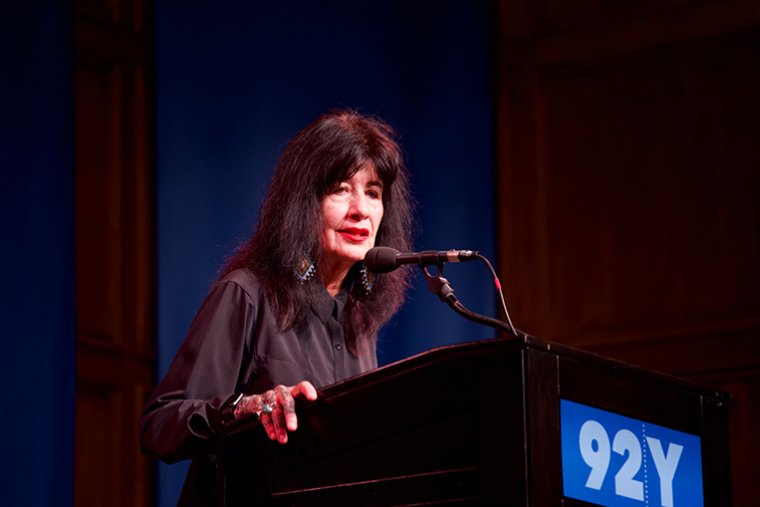 When Girmay arrived on the stage she said she wanted to adjust her reading selection in response to the work we had just heard from the group she called the “younger-than-me writers.” Girmay’s choice—and the fellowship evoked in the collective term writers—was subtle yet beautiful for how it seized a possibility for conversation and community. And the first poem she chose felt resonant with those principles. Here’s an excerpt:

He says, moving his hand to mean “all around us,”
that this is my home. He means Adi Sogdo,

but he also means the world.
Though I think, in “America,”

that I am There &
he is Here, that we are different, or far,

really, we are each other. My bones are
your bones, he says. His teeth are my teeth

& my smiling is his smiling.
He holds my arm tight, until it is a stone, a bone.

He smooths my hair
with force. I am a horse.

The poem continues, but I loved the last line here, in particular. When Girmay read it aloud, the internal rhyme force:horse gave the illusion of acceleration. Where before I followed the poem’s words as an outsider, suddenly I had slipped inside the sound and rhythm of the reading, an immersion almost prophesized by the “My bones are / Your bones.”

Joy Harjo’s reading felt similarly relational and immersive. She began with a land acknowledgement—a statement to recognize that we were gathered in the territories of the Lenape people. While land acknowledgments are becoming increasingly common at community events, Harjo noted that many speakers miss the point. The acknowledgement is “not an elegy,” but a “blessing.” It’s a means of saying: “Thank you for taking care of this place.” Just as Girmay had done twenty minutes prior, Harjo began her reading by foregrounding—making present—the voices of others. Both poets began to speak with a keen awareness that they were entering a space with stories already in the air. When Harjo started to read—and sing—her poetry and songs continued to develop these complex spirals of time, peoples, and geography in the room.

While listening to her read “For Calling the Spirit Back From Wandering the Earth in Its Human Feet,” one line stayed with me: “Let the earth stabilize your postcolonial jitters.” Stabilize felt like a particularly helpful verb to think about how to move forward in our times. The action does not make its object disappear, but it might make a painful thing easier to carry, observe, and eventually resolve. And beyond the line itself, Harjo’s performance in general was stabilizing. Her voice was resonant and unrushed. She looked closely out into the audience; she leaned a little forward.

I enter events with “jitters” sometimes—especially if they’re crowded—and I often imagine the point of attending a reading is to try to lose myself in it. I had arrived to this event alone and chose, by habit, a seat toward the back where I could feel anonymous and forget the audience. But after an unexpected reunion with two friends, I was suddenly sitting alongside familiar faces. During the reading there were brief moments of contact: We’d glance at each other, or lean, and a distance collapsed. This, too, was stabilizing. The room in all its voices reasserted itself, and after Girmay and Harjo, I learned to lean into it.

Spencer Quong is the assistant editor of Poets & Writers Magazine.

Joy Harjo has been named the twenty-third Poet Laureate of the United States.

Poet Joy Harjo talks about how the women’s movement, jazz, and Native American and mainstream U.S. culture have influenced her work.

Friends gathered at the 92nd Street Y on the evening of September 23 to pay tribute to the esteemed poet Mary Oliver, who died in January at the age of eighty-three.