Khaled Hosseini and Elizabeth Gilbert Among "World's Most Influential People"

Authors Khaled Hosseini and Elizabeth Gilbert are included in Time's fifth annual list of the world's most influential people. The current issue of the magazine features a short essay on each of the hundred people on the list, including all three major presidential candidates, the Dalai Lama, Oprah Winfrey, Brad Pitt and Angelina Jolie, and Lance Amstrong. 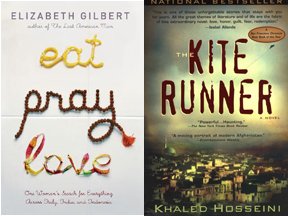 In her essay about Hosseini, Laura Bush (whose husband also made the list) writes, "Not many people write successful first novels. Still fewer are able to change the world with their writing." The publication of The Kite Runner (Riverhead Books, 2003) and A Thousand Splendid Suns (Riverhead Books, 2007), Bush argues, proved Hosseini could do both. And in a nod to her husband's literary habits, the first lady adds, "Hosseini has said his novels intertwine the 'intimate and personal' with the 'broad and historical.' As President Bush and I have encountered him through his writing and his work, we've discovered that his life does much the same."

Agent-turned-writer John Hodgman (the PC in Apple's "Get a Mac" ad campaign) writes about Gilbert, author of the best-selling Eat, Pray, Love: One Woman’s Search for Everything Across Italy, India, and Indonesia (Viking, 2006) as well as a novel, a story collection, and a book of creative nonfiction. "Because we are friends, I get to call her 'Liz' Gilbert," Hodgman writes. "In fact, I sometimes don't even say 'Gilbert.' Just 'Gilb.'"

Although he doesn't appear on Time's list, video-game designer Shigeru Miyamoto was voted the most influential person in the world by readers of the magazine.