On Wednesday, supporters of the short story gathered in New York City at the New School’s Tishman Auditorium on West Twelfth Street for the fourth annual Story Prize award ceremony. The $20,000 Story Prize is given for a collection of short fiction published in the United States during the previous year. Writers, editors, and industry professionals trickled in from the frigid evening, melding with students and writerly types and filling the space with convivial banter.

Signed copies of the finalists’ story collections—a trio of beautifully designed volumes— were arranged in a display near the stage: Jim Shepard’s Like You’d Understand Anyway (Knopf), its cover featuring a stipple-shaded sketch of two wrestlers entwined; Vincent Lam’s Bloodletting & Miraculous Cures (Weinstein Books), with an antique diagram of a human heart; and Tessa Hadley’s Sunstroke and Other Stories (Picador), featuring a stark photo of a bare bulb-lit room.

The half-full room hushed as Robert Polito, director of the graduate writing program at the New School, delivered his opening remarks, saying, “All of us who live and die by the word…are cheered when the world flashes on short fiction.” Larry Dark, the prize director, echoed that sentiment, assuring the audience that the evening would be devoted to “a higher and smarter form of human endeavor—the story.”

Tessa Hadley, who traveled from Cardiff, Wales, to attend the ceremony, commenced the series of readings with her story “Matrilineal,” and dedicated the piece to her mother. The reading centered on a domestic quarrel between wife and husband, about which Hadley commented, “A row…always seems a good thing to read out.” She read in a gliding, curvaceous tone—an expert at conveying the beats of discourse. At the end of the excerpt, which was met with warm applause, Hadley and Dark settled into two leather chairs onstage to converse about “Matrilineal” and her attraction to the short story form. Hadley discussed her own domestic experience, described as a “slinking around having a private life at home,” which afforded her time, if not the discipline—babies’ naps only last so long—to build a writing life. She also talked about working with the material of her youth in the 1970s, when many of her stories are set, as “casting out ropes from the now to the formative” to grasp at answers to “How did the now come out of then?”

Vincent Lam, who lives and works as an emergency physician in Toronto, Canada, entered the stage next to read his story “Afterwards.” His debut collection features interrelated stories following the evolution of four young doctors, occasionally glimpsing into the lives of their patients. Lam read delicately and with precision the almost ceremonial attempts of doctors to resuscitate a patient whose bodily processes were succumbing to inertia: “Around the silent man, a choir of beeping monitors.” Lam’s reading captured the elegant movement between thought and speech, particularly that of one doctor as he delays delivering the news of death to the family of the deceased by elaborating on the events preceding mortality, reasoning that “the story needs to come before the ending, so that looking back, it makes sense.”

Dark returned to the stage to chat with Lam, poised in a gray suit and matching shirt and tie, about the experience of practicing medicine and writing. Before he had children, Lam said, hospital shiftwork helped him to cordon off time to write. Lam’s worlds eventually collided as his work was published and became more widely available, prompting him to experience a “dual sense of delight and terror” at the prospect of his colleagues reading fiction which reflected their lives. (The book has been well-received, however, by his peers.)

After a brief intermission, Dark introduced Jim Shepard, saying that the author writes in an age when “‘write what you know’ has largely drowned out Excelsior.” For Shepard, it seems, the necessary course of action is then to get to know as much as possible; he later quipped that while he “knew everything from birth,” his wife has described him as “the only person she knows that would bring a history of the guillotine to the beach.” He read a selection from the story “The Zero Meter Diving Team,” an account of the lives of three brothers as they intersect with the disaster at Chernobyl, beginning with the line, “Guilt, guilt, guilt.”

Shepard prefaced his conversation with Dark by testing out the mobile capability of his chair, rolling back and forth as he remarked that he possesses the “emotional inner life of a ten-year-old.” The two then talked, with Shepard frequently inciting a friendly repartee about Shepard’s inspiration for the Chernobyl piece (“I’ve always been attracted to feel-good stories”), which was written after he read oral testimony of those involved and was affected by people’s “wanting to hide the wrongdoing no matter what,” an attitude that “had some resonance in our current culture.”

Finally, Julie Lindsey, founder of the Story Prize, took to the podium and announced Shepard as the 2007 winner, selected by this year’s judges, David Gates, Patricia Groh, and Meghan O’Rourke. A wave of applause, and shouts of congratulations—most exuberantly from his wife, Karen—overtook the room as Shepard accepted an engraved silver bowl and the $20,000 prize. Shepard thanked his parents, editors, writer friends, brother, wife, and books, and graciously praised the work of the other finalists, who each received $5,000, saying that he was “already pleased to be on any list that included Vincent Lam and Tessa Hadley.”

The relaxed celebration continued at Marquet, a café one block away, as guests mingled and chatted in the warm, artwork-filled space. Shepard arrived quietly and appeared content as he lingered in the front of the restaurant, greeted by a steady succession of friends—all offering their congratulations. 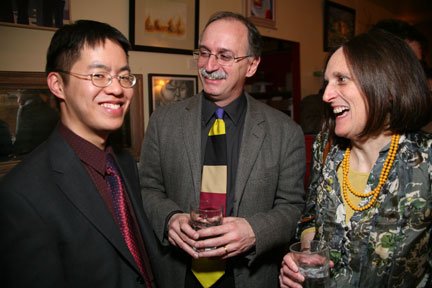 Hadley, Lam, and Shepard Named Story Prize Finalists
by Staff | Daily News 1.10.08
The finalists for the fourth annual Story Prize, a $20,000 award given for the year's best short fiction, were announced yesterday.
Keeping It Short and Sweet: Postcard From New York City
by Doug Diesenhaus | Postcard 2.1.06

The second annual Story Prize ceremony, held at the New School’s Tishman Auditorium in late January, began like most literary events in New York City—with much chattering among publishing folk, rising in volume until the lights went down and a...

This year’s annual Story Prize ceremony, held on Wednesday, February 28, at the New School’s Tishman auditorium in New York City, marked the award’s third year and an evening that is fast becoming an established literary event.