Cathy Park Hong is a poet interested in the porous boundaries between languages and cultures. In her newest collection, Dance Dance Revolution (Norton, 2007), winner of the 2006 Barnard Women Poets Prize, Hong creates a poem sequence that takes place in a future city called the Desert. It is in this tourist town, modeled on the likes of Las Vegas and Dubai, that Hong introduces the Guide, an amalgam of new and extinct English dialects, Korean, Latin, Spanish, and other miscellaneous pidgins. Acting as the reader's escort, Hong uses the Guide to address the issues of identity, both personally and geographically, in an increasingly globalized world. 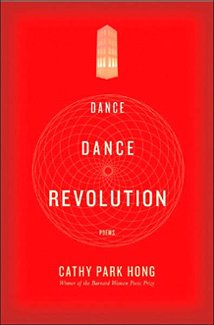 Hong grew up in Los Angeles and received her BA from Oberlin College and her MFA from the Iowa Writers' Workshop. She now lives in Brooklyn, New York, and teaches at Sarah Lawrence College.

Poets & Writers Magazine asked Hong about the title of her new collection and its significance.

Cathy Park Hong: I can tell you it has nothing to do with my aptitude for the video game! Dance Dance Revolution, if you’re not aware, is a kind of “Simon Says” video game with a dance pad where you follow the arrows with your footsteps, and if you're a whiz at it—which I clearly am not—it looks like you’re break dancing. I initially wrote an irreverent poem that was inspired by the game. I abandoned the poem, but I kept coming back to the broader concepts of the game, its phrasing, and realized the title was an appropriate fit for the narrative I was creating for my new collection. I was fascinated by the origin of the game—by the fact that the Japanese appropriated Western dance moves to turn into a video game, a game which was then imported back to the West with explosive success. I loved the cultural zigzagging, which seemed appropriate since the book has much of that misplaced cultural bartering happening in the imagined city. I was also thinking the dynamism of the game and the title’s double-verb etymology related back to the dynamism I was attempting to create in the book's language and world. I could go on and on, but to put it all simply, I stole the title of the game because there is a revolution in the book. And there is dancing.

P&W: Dance Dance Revolution is what I consider a "project" book, one that centers around a specific framework, narrative, or conceit. Could you explain the project and tell us how it developed?

CPH: I never intended to write a project book. It was a collision of different obsessions I had at the time that managed to plait themselves into a narrative. The book is about a tour guide who used to be a former South Korean dissident and works at a resort city set in the future. This city is called the Desert. The book is part tour of the city, part tale of her past life as dissident in Korea. She speaks in an invented dialect that is really a mash-up of extant and extinct English accents. In my conception of her, I was fascinated by Dante’s Virgil, and I was thinking what a guide means in contemporary times—a guide as crass tour guide, guide as poet and storyteller, guide as revolutionary, or guide in the spiritual sense. I also wanted to create a kind of flawed antihero, like Brecht’s Mother Courage, and this generated the Guide in the book. The Guide’s voice is fickle, not always virtuous, not always true, full of bravado one minute and then earnestness the next. Unlike fiction, there’s more of an obligation for grave truth-telling in poetry. The voice assumes a truthful virtue even when the poem purports to not have a voice. I wanted to escape from that and create a character.

As far as the language, I was reading a lot of linguistic theory at the time, particularly on this idea of Creole as a language that is in transition. French, for instance, was a Creole of Latin before it became the "official" language. English is always in transition, although the Standard version is more likely to be frozen in its glass cube. But spoken, English is a busy traffic of dialects, accents, and slang words going in and out of fashion. Slang is especially fascinating. I love outdated slang dictionaries—these words are artifacts that tell you the mindset and squeamish taboos of a certain milieu during a certain time period. I wanted the English in the book to be a hyperbole of that everyday dynamism of spoken English.

P&W: At times, books that center around a project sacrifice lyric intensity for the sake of fulfilling its planned design. Did you encounter any difficulty maintaining the objectives you set out for yourself while completing the book?

CPH: I didn’t set out with a thought-out project so there wasn’t a list of objectives. My poems were always about these miniature alternate worlds. One of these miniature worlds—this would be the Desert—inflated itself out to become book-sized. It felt more like I was following the tale rather than fitting the tale inside a planned design. So to directly answer your question, I didn’t have difficulty because I didn’t have any predestined agendas.

I remember a teacher telling me that he preferred isolated poems to serialized ones because of exactly that reason—it lacked a lyric intensity. Perhaps, implied in that, there's also less discipline, which I could agree with. There’s less of that obsessive word-for-word scrutiny and there’s not that frequent confrontation of returning to the blank page and starting something new, which requires a certain discipline. At the same time, I don’t think a project-oriented book is all that different from a collection of discreet verse. We always have a project in mind—sometimes it’s more consciously labeled, whereas for others it’s more subconscious. You could interpret Dickinson’s poems as a collection of one project.

Perhaps it’s not necessarily that I’m project-oriented, but rather I find myself becoming more attracted to the narrative tradition and inverting, playing, and contorting it. The lyric is a shirt size too small. My ideas are constantly spilling out of it. I think I’m more maximalist even though I tend to admire more minimalist poets like Celan, Dickinson, and Niedecker. But also, the lyric has traditionally been used for interior individual impulses and experiences, whereas the epic narrative has always been the stomping ground for the collective. Although Dance Dance Revolution is predominantly in the Guide's voice, I was hoping to address not only the individual but the collective as well.

P&W: Both Dance Dance Revolution and your first collection, Translating Mo’um, are concerned with the tenuous borders between various languages and cultures, particularly between Korean and American contexts. Do you find the politics of identity to be the central focus of your work or more an integral part of your writing?

CPH: Translating Mo’um was more preoccupied with the self’s confrontations with colliding national boundaries. But I'm a little tired of the navel-gazing connotations of identity-politics poetry—strangely, it’s become a loaded term. In its crudest definition, it is how the self is culturally different from the majority and then it is an attempt to universalize those cultural differences. If you follow that definition, there are quite a few nonminority poets who write identity-politics poetry.

I wanted to work beyond the parameters of identity in Dance Dance Revolution. Korean history plays a large part in the book and there is a latticework of border-crossing, but that has less to do with the self per se than with history and collective. Terry Eagleton wrote a review on a volume of 19th century British Utopic writings and said that with alternate universes, "the point is not to go elsewhere, but to use elsewhere as a reflection on where you are." The Desert is an omnibus city, an allegorical space of a present condition, which could be present-day Korea or America as well as other places.

I am interested, and always will be, in what you said: "the tenuous borders of languages and culture." I’m not saying that my ethnic identity plays a scant role, but it's now more temperament rather than a subject matter. Like most writers from bicultural backgrounds, I do share a "stranger within one's own language" consciousness, but as I continue to write, it has less to do with the actual naming of my ethnic identity. To exist between tenuous borders gives you liberty where you’re less beholden to tradition and the expected parameters of the English language, forms, and genres. I think that some of my favorite writers—like Kafka or Sebald or Cha—encompass that renegade ideal.

P&W: Do you consider language, particularly with regard to your own poetry, a political act?

CPH: In my poetry, I see a connection between politics and language, although I wonder if it’s a political act. I think of political action as looking forward, whereas language in poetry, since it's such a glacial process anyways, is an act of reflection rather than an instrument for forward-thinking change. Poets commit political acts by what they do on the side. George Oppen is the perfect model of a poet who gave his whole life to political commitment by joining the Communist party and then moving to Mexico to escape McCarthy. For him, language was more a place of silence, a place in between acts.

Of course, I do think there are political ramifications in language that poets should be aware of, especially now. Language is just getting husked now with all the irrelevant and destructive chatter out there. Bush has done a fine job plundering language. He's our true postmodern president—his rhetoric is emptied of all meaning and context. Overall, there's a lot of chaff out there. I was reading this one interview with this artist Paul Chan who said that because of all the mass media and communication, we have this burden of connectedness. Because of this burden of connectedness, we’re either overwhelmed by language or we shut it out completely. He says that the artist should be like a radio that finely tunes into the frequencies that float around us. I think that's an apt way for poets to look at language. Words have historical roots, implications, connotations. Language is not just a neutral aesthetic medium, but I think it's easy for poets to think that we're writing inside this academic box because the genre is so outside the market. There needs to be an awareness of how language is being used today, but we need to discern, pick out, and infuse meaning back into that chaff.