An Interview With Creative Nonfiction Writer A. J. Jacobs

A. J. Jacobs is an editor at large for Esquire and one of the premiere immersion journalists and humorists working today. His previous book, The Know-It-All: One Man’s Humble Quest to be the Smartest Person in the World (Simon & Schuster, 2004) recounted his attempt to read the entire Encyclopedia Britannica. His new book, The Year of Living Biblically: One Man’s Humble Quest to Follow the Bible as Literally as Possible, published this month by Simon & Schuster, tells about another quixotic endeavor. Needless to say, it was a difficult one, given the Bible’s eight hundred explicit rules, many of which are bizarre and unexplained—no mixed fibers; no touching unclean women—plus lots of guidelines and suggestions. 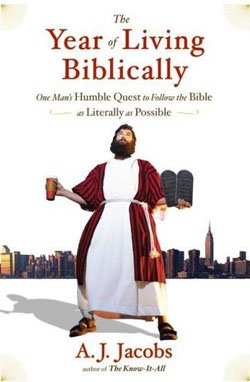 Jacobs graduated from Brown University with a philosophy degree in 1991, but found the job market for philosophers had dried up, so he turned to the next best thing: writing. After working for a small paper in San Francisco, he published a humor book called America Offline (Cader Books, 1996), which informed readers about the "World Wide World," and offline chat rooms called "Parties." It didn’t sell a lot, but it did help Jacobs get work from the New York Observer, Entertainment Weekly, and finally Esquire, where he continues his brand of witty exploration of topics like "radical honesty," outsourcing his work to India, and posing as a woman online.

Poets & Writers Magazine asked Jacobs how he got his start as a literary journalist, or immersion journalist.

A. J. Jacobs: One of my first experiments was to attend the Academy Awards pretending to be a movie star. Back in the '90s, I had an eerie resemblance to a minor movie star named Noah Taylor, who wore the same clunky black glasses and weird Dutch Boy haircut that I had. I was working for Entertainment Weekly at the time, so I went to the Oscars as this guy. It was fantastic. I’ve never had such an ego massage. And the actor liked it too; he’s apparently shy, so he was happy to have a stand-in.

P&W: And who are some writers of the writers who have inspired you?

AJJ: Mark Twain. Bill Bryson. Tom Wolfe. I first encountered Nellie Bly when I was reading the encyclopedia. But she’s definitely inspiring. She was a 19th-century journalist and perhaps the first immersion writer. She feigned insanity to write an expose on an insane asylum. And she tried (successfully) to duplicate Jules Verne’s trip round the world in eighty days.

P&W: And books that influenced you?

AJJ: Tom Wolfe’s Electric Kool-Aid Acid Test blew me away in high school. And this will sound kind of pretentious, but I loved Pale Fire by Nabokov. Not so much for the content, even. But for its form. I read it early on and it gave me the idea of how you can format books in creative ways.

P&W: What do you think it is about Mark Twain that makes him endure?

AJJ: It’s odd. I think most—almost all—humor has an expiration date. You read most of these 18th-century humorists, and it’s like reading a biochem textbook. But Mark Twain is a huge exception. I hate to use the cliché "ahead of his time." But it fits. I reread his Letters From Earth for my book about the Bible. It’s amazingly modern, almost Hitchens-esque. It’d be considered blasphemous now, I can’t imagine what it would have been considered then.

P&W: What would you say are your goals as a writer?

P&W: And as a writer, did you glean anything literary from such a close reading of the Bible?

AJJ: My favorite section in the Bible is Ecclesiastes. The metaphors are awe-inspiring. To take just one: “All is vanity and striving after the wind.”

P&W: What about the encyclopedia?

AJJ: The modern encyclopedia is a pretty bone-dry high school textbook style. But some of the earlier editions from the early 1900s were quite beautiful. Consider Lord Maculay’s essay on Samuel Johnson, which contained passages like this one, about Johnson’s moroseness: “The light from heaven shone on him indeed, but not in a direct line, or with its own pure splendour. The rays had to struggle through a disturbing medium; they reached him refracted, dulled and discoloured by the thick gloom which had settled on his soul, and, though they might be sufficiently clear to guide him, were too dim to cheer him.” That’s writing, no?

AJJ: That’s a tough one. Since the encyclopedia contains lots and lots of Bible quotations and summaries, I guess I’d have to go with that. It’s almost like a two for one deal. Plus, the explorer Ernest Shackleton—when he was stuck in Antarctica—used the Encyclopedia Britannica for kindling. So it’s got that use as well.

P&W: So what’s your book next?

AJJ: I’m waiting for divine inspiration. I have a few ideas, but I haven’t settled on which one to pursue. My wife wants me to write a book about eating at every restaurant in New York, because she likes to eat out. I don’t know if that’s going to work. But it’s a thought.