Imagine a World Without Writing

Joining titles such as Edith Grossman’s Why Translation Matters and Jay Parini’s Why Poetry Matters in Yale University Press’s Why X Matters series, Nicholas Delbanco’s new volume, Why Writing Matters, explores questions of influence and the creative impulses toward imitation and originality. The author of more than thirty books of fiction and nonfiction, Delbanco draws on his decades of teaching experience at Bennington College, Skidmore College, Columbia University, and elsewhere—he was director of the Helen Zell Writers’ Program at the University of Michigan in Ann Arbor until 2015—to offer a kind of reading workshop, equal parts memoir, literary history, and scholarly analysis. 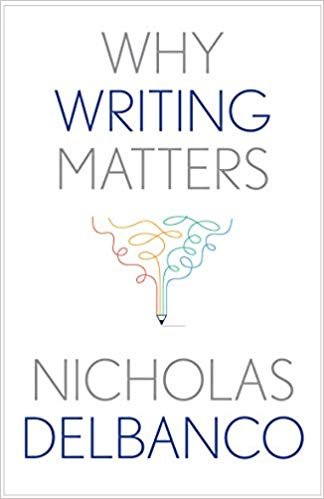 Below is an excerpt from the book, forthcoming from Yale University Press on March 17.

Let us imagine, in writing, how a world without writing might function. This is a self-negating proposition, clearly, and one that can’t be addressed by means of and in the context of writing itself. But, for a moment, let’s try. What would it mean if nothing were written, if the pronouncement “I give you my word” were sufficient as a contract, and if laws and liabilities were not codified as letters and words on a page? All language would be spoken text, except that “text” would not exist and what we’d as a species rely on would be only, entirely, speech. The great preserved works of our culture would have been doomed to extinction, the records we keep null and void. Had I written “void and null,” at least a few readers would question the reversal of terms in the formulaic phrase, but without a readership (because there is no writing) there would have been no eyebrow raised or effort at correction; had I written “zoid” and “gull” it would have made no difference, since neither a robot nor seabird would have been by those letters described.

We operate, I mean, under the assumption that language is in crucial part a written thing, and not merely spoken or signed. Our culture is so indebted to and organized by writing that it’s difficult to reconstruct a place and time where it failed to signify, and mankind did without. The system of transmitted knowledge requires a visual as well as verbal exchange of information; what we fail to remember we read. And even those whose memory is encyclopedic will have an outer limit to what can be recalled.

For a professional pleb of words it’s doubly difficult, somehow, to imagine a world without writing, but all of us who take written language for granted would be, I think, shocked by its disappearance and in its absence aggrieved. It’s the alpha and omega, the a to z of what we learn from predecessors, the Rosetta Stone of culture even when those cultures have long been extinct.

When the Rosetta Stone itself—a granodiorite stele found by French soldiers in the Egyptian desert in 1799—was brought back to Europe and finally deciphered, we learned much. The decree had been recorded in three languages and inscribed in 196 BCE in the reign of King Ptolemy V. It proclaimed the king’s divinity and the excellent accomplishments of his so-far reign; it was intended to be understood by all of the king’s subjects and therefore was composed in three modes.

The first of these was hieroglyphic and (to the eighteenth-century reader) entirely opaque; the second was demotic Greek, or Coptic, which had been the language spoken by the priests and people of the region; the third was classic Greek. A French scholar, Jean-François Champollion—who knew both classic and demotic Greek—was able by comparing them to see they declared the same thing. Under the assumption that the third set of seeming-incomprehensible symbols was repeating the repeated text, he was able to decode it in 1822.

Think of the moment that multilingual Frenchman knew what he was looking at and first understood the stone. It had been more than twenty years since Napoleon’s expedition to Egypt had brought back the recovered object, more than two thousand years since the scribe or scribes incised it with Ptolemy’s decree. From that moment of discovery and comparative analysis, the history of Egypt and its written discourse opened out like a closed flower or a folded fan. Through an illustrative set of marks, it told the reader-scholar more than he otherwise could comprehend about the vanished past. Now the Rosetta Stone stands in much-visited glory in the British Museum in London. The language has lasted, will last.

Were we to draw the scene as cartoon, there would have been a light bulb igniting above Champollion’s bent head; were his name Archimedes, we would have him exclaim “Eureka” while lolling in the bath. That sudden flash of inspiration, that moment when the world makes sense, is what we all experience when we first view written language and learn how to read. Without it we stare uncomprehending at serried marks on rock.

My argument therefore boils down to this: written discourse is a marker—both in the present moment and of the past and for the future—of what we hold most dear. Thought and emotions are inexpressible until by language expressed. Further, it’s difficult to say a clear thing confusedly, or a confused thing clearly (unless, perhaps, I’ve managed to do so here). This is all the more true of writing, and it’s why writing matters; a thing worth saying is worth transcribing well. Writing matters. Why? This is not a rhetorical question, but one that still needs to be asked.

From Why Writing Matters by Nicholas Delbanco. Published by Yale University Press in March 2020. Reproduced by permission.

Nicholas Delbanco is the Robert Frost Distinguished University Professor Emeritus of English Language and Literature at the University of Michigan. He has published thirty previous books of fiction and nonfiction, including The Count of Concord, Spring and Fall, The Countess of Stanlein Restored, and The Lost Suitcase: Reflections on the Literary Life.