Last Sunday, a group of poet friends and I made our yearly pilgrimage to our alma mater, Sarah Lawrence College, for the annual poetry festival organized by a coalition of graduate and undergraduate creative writing students. For the first time since 2005, the sky brightened for the weekend event (rainstorms had become a sort of Sadie Lou poetic tradition), which consisted of readings and discussions with established, emerging, and student poets. This year’s lineup included Jorie Graham, Rita Dove, Linda Gregg, Valzhyna Mort, C. K. Williams, and Mary Ruefle, among others. 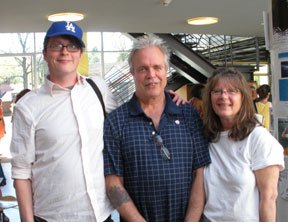 We sat in the upper tier of the college’s green-designed Heimbold Auditorium for what felt like a mid-summer’s panel—the doors flung open letting natural light and balmy air into the space—on poetry and community. Poets Michael and Matthew Dickman joined Dorianne Laux and her husband Joseph Millar to talk about their “poetry family,” which came into being years ago after the twin brothers, posing as potential MFA students, contacted Laux at the University of Oregon, where she was teaching. Born out of the impulse not for friendship but something more like mentorship—“to sit at the feet of older poets whom we respected,” as Michael put it—the two sat down with Laux for a short meeting and wound up conversing for hours about reading and loved books. “Communities can grow out of anything,” said Matthew, who later mentioned his poetry-fueled friendships with “cooks, dishwashers, people who work at libraries.” In the case of his and his brother’s relationship with Laux, it grew out of a mutual “inner life of reading.”

The poets began visiting one another often, having established an instant bond as lovers of similar literature—“and it probably didn’t hurt that my brother is a really good cook,” Matthew added. They functioned as a kind of reading group, but began folding in writing exercises, as there was a certain appeal to making their time together about writing right now. “The blank page equalizes everything,” Michael said, suggesting that writers, no matter their level of experience, are all situated at the same stage when it comes to starting new work, and that newness—a vulnerable state—can be uniting, even among diverse groups.

And joining a diverse group is sometimes the only way to jump into community, I thought, recalling the first days of my own MFA program at Sarah Lawrence: the campus peppered with new faces telegraphing excitement, generosity, wariness, swaggering confidence, and that first open mike that exposed how very different all of our poetries were. “You have to be willing to look for community wherever you can find it,” said Millar, “not be proud, not be aloof, not be a stuck-up writer.” He noted that when he was a time-crunched father who had difficulty making mental space for writing, he began frequenting workshops made up of all different types of writers. With people expecting work each week, it was only natural to get writing again.

“The most important thing about going to an MFA program is your peer group,” said Laux, touching on the importance of finding people who are critical of your work because they trust that your projects—your art—is valuable, champions who support what you are doing. And after the MFA, when the community usually endures a physical split? Social networking communities, blogs, and other online media—at least according to Laux and Matthew—can help keep the community spirit alive.

Laux talked about Millar’s aversion to hearing how many fans he had on the Facebook fan page she created for him—when the number was fifty, Laux said, laughing, he asked her if he should send each a note, and when it jumped to two hundred, he no longer wanted to hear about the thing. Michael expressed his inability, or lack of desire, to “keep up on things like this,” and went on to air his view on blogs, which was gleefully refreshing. I’ve read very few,” he began, “and I tend to hate them,” saying that “they look so slick and professional—but they’re not!” After Millar begged him not to hold back, Michael went on to question the value of many bloggers’ trademark community-busting cynicism and cattiness, saying, “There’s so much space between [the blogger] and whoever’s reading. There’s no accountability.” Matthew chimed in with a knock to the “Google-brained sarcasm” prevalent in the blogosphere.

Returning to the theme of using time together to write, someone suggested Millar hit us with one of the writing exercises he’s come up with as a way to engage the twins, Laux, and any other guests who come to visit their home. A mass shuffle ensued as the audience members who weren’t already taking copious notes rifled for pens and notebooks.

“The words are blanket, air, black, throat, damp, road, dust, and you have to have something to eat in there,” Millar instructed us. “You have to have a time of year—like a haiku. And you have to have the phrase ‘jump on it.’” Some sighs of disappointment—including my own—rose from the audience as the moderator noted that we were out of time and we wouldn’t be writing just then. But when I approached Laux and Millar in the lobby after the reading, and my friends and I thanked them for sharing their conversation with us and for the prompt, Laux insisted we send her our poems, and I had a feeling they’d be delighted to hear from anyone who tackled the exercise. Founded by simple gestures of mutual respect—and a generous love of the art—communities, writer friendships, families, and other systems of support are always waiting to be written into existence.

This past weekend, as the sidewalks and the streets of midtown Manhattan once again began to fill with urban dwellers lingering in the first warmth of spring, some of New York City’s writers and publishers found pause indoors, creating,...

On the second Saturday of this month, a renovated turn-of-the-century electrical parts factory in the Long Island City neighborhood of Queens was aglow with jovial literary energy, much of which was generated in response to the albatross of many...

Fiestas in the Desert: Postcard From Tucson
by April Conway | Postcard 4.17.09

Earlier this month, Brian Turner, Buddy Wakefield, Ofelia Zepeda, and other poets gathered in the desert for the twenty-seventh annual Tucson Poetry Festival.