Edited by Rowan Hisayo Buchanan and published by the Feminist Press, in collaboration with the Asian American Writers’ Workshop, Go Home! is an anthology of fiction, memoir, and poetry by Asian diasporic writers, including Alexander Chee, Marilyn Chin, Kimiko Hahn, Chang-Rae Lee, Rajiv Mohabir, and Wendy Xu, who imagine the concept of “home” in all its complexity. Below is the foreword by Pulitzer Prize–winning author Viet Thanh Nguyen. 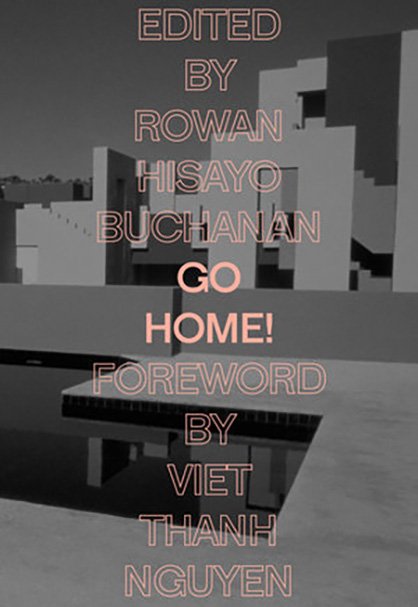 When I was seventeen, I could not wait to leave home, even though I was more fortunate than many. My father and mother did nothing wrong in our home, which was in San Jose, California. Our first house was by a downtown freeway entrance ramp, the soaring taillights of the cars visible from my bedroom window. I dreamed of taking off with them. Our second house was in the quiet foothills, where my father still lives, his bedroom furnished with a computer and a photocopier manufactured in the 1980s.

There was no abuse, and there was always food, warmth, light, and religion. There was love, too, the quiet kind that expresses itself not through words and embraces but through acts of sacrifice, through the model of parental lives given to duty: the twelve-to-fourteen-hour days working at a grocery store with hardly a day off, the devotion to the church, the remittances sent home to desperate relatives in a postwar Vietnam—the typical grind of all refugee families.

And yet, despite not needing anything, I wanted more, although exactly what, I did not know. I wanted to leave home because I wanted to find a home of my own creation. My parents’ sacrifice allowed me to yearn for more than they could give, and for more than San Jose or the Vietnamese refugee community there could offer. To my teenage self, it was a bland city of routine desires for suburban homes and expensive goods, not of ideas or “culture.” To me, culture meant the world I read about in books and saw in movies, the charming white fantasies of Paris and New York.

The culture of San Jose that I knew, the Vietnamese one, was neither charming nor fantastic. The Vietnamese community was marked by close bonds of kinship and identity but also by the fallout of war, demonstrated through anger, violence, and bitterness. It was the war that drove my parents to become shopkeepers toiling in their store, where they were shot one Christmas Eve. They were suspicious of their own countrymen and warned me never to open the door to Vietnamese people, for fear of them invading our home (when it happened, when the gun was pointed in all our faces, the hand holding it belonged to a white man). The closeness and the legacy of trauma meant, for me, an atmosphere of suffocation, confined by the walls and boundaries of my parents’ home, of the Vietnamese community, and of San Jose.

I did not know it then, but what I wanted was a home without walls and boundaries. For some, walls and boundaries comfort rather than confine, keeping things out and keeping things in. As a refugee and an alien in the eyes of many Americans, I knew inarticulately that I was an outsider. At my mostly white high school, the handful of us who were Asian gathered in a corner for lunch and called ourselves the “Asian invasion.” Growing up in San Jose, I might have become one of those outsiders and invaders who only wanted to get inside at any cost. But ever since I had seen a sign in a shop window near my parents’ store that read “Another American driven out of business by the Vietnamese,” I knew that the yearning to be inside—to be just another American—might also tempt people toward hatred and fear.

Comfortably ensconced at last within four walls and a mortgage, we may be tempted to close the door behind us and lock it shut. Some former Vietnamese refugees do so today when they say the United States should not take in new refugees from the Middle East. They are wrong, forgetting that once they were the outsiders whom the majority of Americans did not want to take in. They are not special or exceptional, only lucky to be the beneficiaries of American guilt (at having abandoned South Vietnam) and American political calculation (for taking in refugees from a formerly communist country was simply another strategic move of the so-called Cold War). In contrast to those who use homes to shut people out, I believe that we need to keep our doors open. Or knock down the walls altogether.

I found a home in language and storytelling. This home has walls of a kind. One needs to speak and read English to be in my home, which can be unwelcoming to some. But no one is locked out, beginning with me. I found my entryway in school, learning to read, and through librarians at the public library. The library was literally my second home and also the home of the books through which I found freedom and flight from a world that I found confining. Books offered adventure, the promise of new worlds, the sight of further horizons. While the San Jose library mostly offered the canon of colonizers, I nevertheless learned from this literature a love of language and storytelling, a desire for beauty in word and narrative. Through books and stories, the world became my home, a place from which I could never be dispossessed so long as I lived and my mind could roam. For a refugee like me who had lost his country of origin and his mother tongue, a home that could never be lost was a way to always feel safe.

It wasn’t until I went to university that I discovered the powerful traditions of decolonization and minority writing, which emerged in part to contest the widely accepted literary canon. These traditions taught me defiance and the values of justice and solidarity, traditions that have their own beauty. Writers deployed them to stake their claim of being at home in literatures often written in the language of masters and colonizers.

The existence of Go Home! testifies to the power of language as a home open to all, albeit one that we must often fight for. Against the racist demand that we go back to where we came from, we say that we are already at home, not just in the United States, but in English.

While this preoccupation with home is a universal human concern, it becomes particularly dire for those whose identities make them vulnerable to the threat of never belonging. This has certainly been the case for Asian Americans, whose experience with racism in the United States has often times occurred through being painted as the perpetual foreigner, the yellow peril or brown terror, with unbreakable ties to a land of origin or ancestry.

But those who tell us to “go home” are no match for those of us who can write back in the very language used against us. The beauty of a home in language is that it allows us to create a multiplicity of homes. The writers in this anthology talk about home as being found in family, history, food, love, place, body, memory, song, and religion. They describe homes filled with all kinds of emotions, from love to hate and everything in between. Their homes are places of comfort and discomfort, of belonging and alienation, of the beginning of life and its end. But if homes are not always idyllic and are often conflicted, and if in some cases it is impossible to go home because home no longer exists or is not a place one wishes to return to, then living with a degree of homelessness might be a necessity. There can be a danger in being too much at home, too secure, especially for writers. Feeling uncomfortable at times—feeling not at home—keeps us alert, empathetic, aware of how so many others are not at home or not allowed to feel at home.

Reading this collection, I visited all of these writers’ homes and experienced their homelessness filtered through their stories and poems. All of their works were gifts to me, and I thought about how homes can be gifts too. While some gifts are given with the hope of receiving something in return, eventually, other gifts are given without any expectation of reciprocity. Stories exist along that spectrum as well. Sometimes writers write and hope for fame or fortune. Sometimes people create homes and expect to reap a return from those they house, a payment in love or at least obligation. But the best gifts, in my mind, are those that we give selflessly. As a writer, I aspire to be that kind of gift giver, hoping that my stories will affect readers I will never know and never hear from, just as I was affected by writers who never knew their words were a gift to me. As the recipient of generosity, I hope to give generously in turn, as I believe many of the writers in this collection are likewise giving of their words and stories.

As for my first home, I think of how my parents gave me so much and how I did not appreciate their gifts in my youth. If I had, would I have stayed home? If I had stayed home, would I have become a writer? Perhaps not. Probably not. And if so, then it was for the best that I left. In my case, as may be the case for many others, I had to leave home in order to go home. This was a figurative return, for I understood, over time, that the home they provided for me was not literally just a house. Their home was the act of giving itself, which is also to say the act of love. Going home, in my case, was then a matter of learning how not just to receive but to give, certainly to my own family but also to those who may be my readers.

Perhaps the writers in this collection also had to leave home in order to go home. Read them. Their gifts will show you the many shapes home can take, as well as the many ways we can leave and, maybe, return.

Excerpted from the anthology Go Home!, published in March by the Feminist Press in partnership with the Asian American Writers’ Workshop.