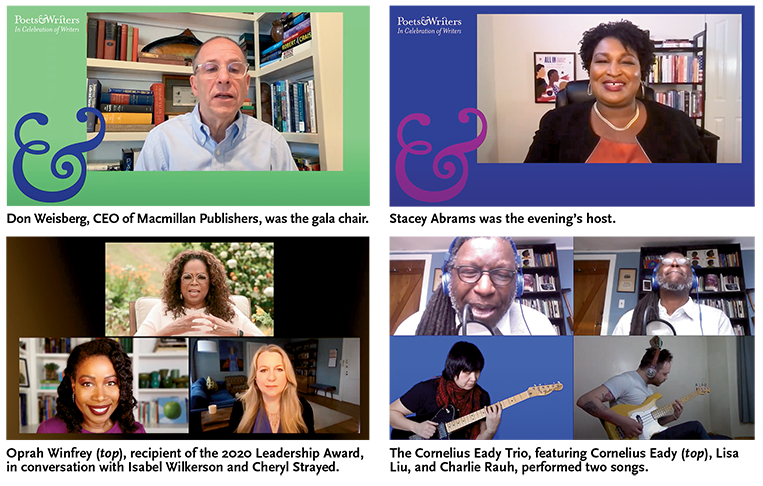 Don Weisberg, CEO of Macmillan Publishers, this year’s gala chair, marshaled extraordinary support totaling over $925,000 from the literary and publishing communities. Thanking the gala supporters, Weisberg said, “This has been a challenging year in ways that each of us individually and all of us collectively know too well. To have raised the amount of money that we have speaks not only to your incredible generosity, but also to your prioritization of the ongoing importance of the task at hand. We all know that America and the world are at a crossroads, and the work we do to give voice to and create pathways for ideas, for dialogue, for writing, is integral to our progress and betterment.”

More than 2,500 people from around the world watched the livestreamed event. The host for the evening was Stacey Abrams, noted champion of voter rights and author of several books, including the thriller While Justice Sleeps (Doubleday, 2021). Abrams spoke directly to the writers in the audience: “During an uncertain time in our nation’s history, as we witnessed unprecedented attacks on our democracy, writing and storytelling help ground us and remind us who we are and of our power. Your words have validated our pain and our frustration with the many challenges we face as a nation: a pandemic that has reshaped every facet of our lives, the wrenching pain of systemic injustice plaguing communities of color, and economic upheaval that is leaving working families behind. But your words have also given us hope during these turbulent times, and they have served as a refuge for those looking for an escape from their daily lives or affirmation that we’re in it together.”

Poets & Writers is deeply grateful to every donor who contributed to make this year’s gala an enormous success. Proceeds from the annual event support Poets & Writers’ programs nationwide. To view a recording of this event, visit pw.org/gala.