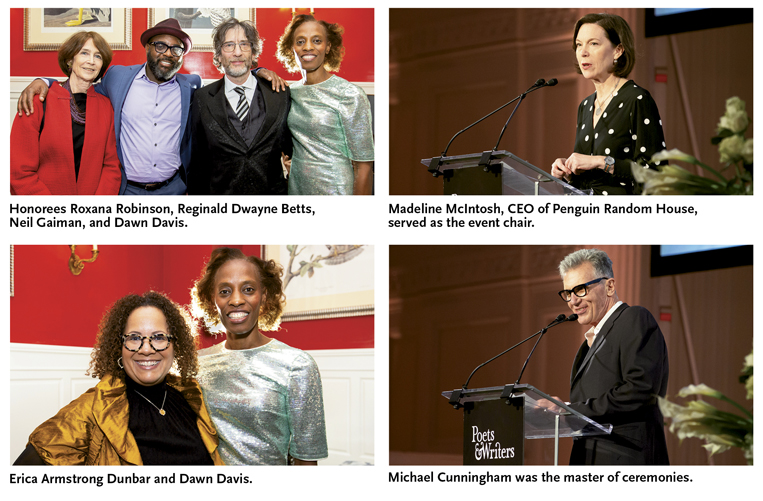 “We live in a time when there are newly urgent causes desperately needing our support every day,” said Madeline McIntosh, CEO of Penguin Random House, at the annual fund-raising dinner for Poets & Writers, held in New York City on March 7. “In that context I know making room to support the arts is harder than ever,” she added. “But…it’s exactly now, in today’s political climate, that we need poets and writers to give voice to outrage, to advocate for change, to foster inspiration, and to provide that much-craved-for occasional escape.”

With McIntosh’s leadership and broad support from throughout the literary and publishing communities, the event raised a record-breaking $750,000 to support Poets & Writers’ programs.

During the event, “In Celebration of Writers,” the 2019 Barnes & Noble Writers for Writers Awards were presented to three authors who have contributed generously to the vitality of the literary community. Reginald Dwayne Betts was recognized for his work on behalf of incarcerated individuals and for criminal justice reform, Neil Gaiman for his commitment to freedom of expression, and Roxana Robinson for advocating on behalf of authors, including during her tenure as president of the Authors Guild, and for championing women fiction writers. The Editor’s Award was presented to Dawn Davis, publisher of 37 Ink, an imprint of Atria Books, a division of Simon & Schuster. Author Erica Armstrong Dunbar introduced Davis.

More than six hundred people attended and dozens of authors served as table hosts. Gaiman summed up the spirit of the event when he said, “There is a fellowship of us. People of all kinds and shapes, all genders and ethnicities, writers of all kinds, trying to change the world by making art.”

For more about the event and the honorees, visit www.pw.org/gala.