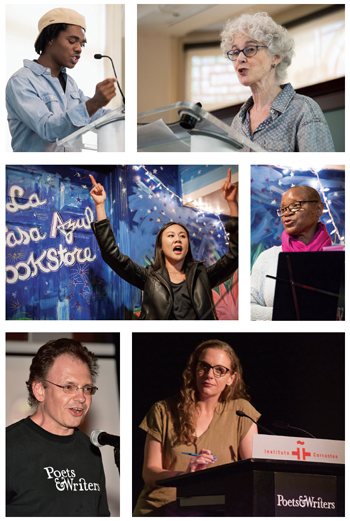 Those of us who have the privilege of working at Poets & Writers are continually inspired and encouraged by the writers we serve. These are just a few of the many who inspired us during 2015:

The writers, including Nkosi Nkululeko and Maureen Allen Holder (top row, left to right), who took part in workshops sponsored by our Readings & Workshops program and then came together to share their work at our eleventh annual Intergenerational Reading, held at Barnes & Noble in New York City.

The writers who participated in our sixth annual Cross Cultural Reading at New York’s La Casa Azul Bookstore—writers such as Sahra Vang Nguyen and Lorraine Currelley (middle row, left to right), who write from the heart of their communities but speak to all of us.

All those who joined us at the Last Bookstore in Los Angeles to celebrate the twenty-fifth anniversary of our California office, including its former director Ryan Tranquilla (bottom left), who came sporting a long out-of-print Poets & Writers T-shirt.

The hundreds of writers who took part in our Poets & Writers Live events in San Francisco, Chicago, and Portland, Oregon, including Jessica Walsh (bottom right), who bravely submitted her query letter draft for public critique.

We salute your courage, your devotion to the craft, and your generosity. We wish you all an inspired 2016!