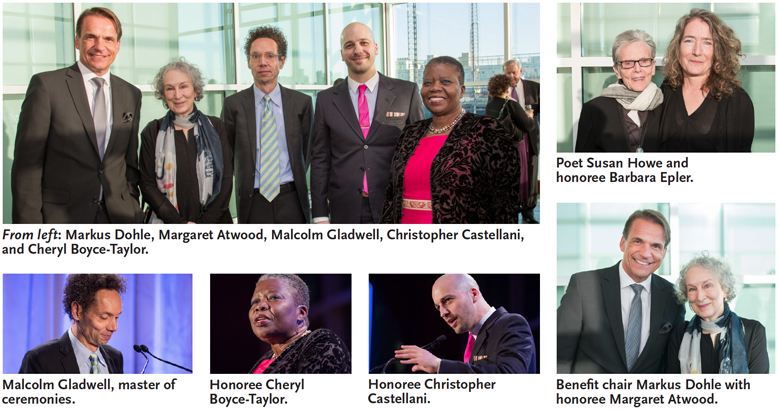 On March 23, Poets & Writers celebrated the enormous contributions writers make to our culture at our annual fund-raising dinner. The event, chaired by Markus Dohle, CEO of Penguin Random House, raised over five hundred thousand dollars to support Poets & Writers’ programs and publications. Close to five hundred people, representing all aspects of the book business, attended. Malcolm Gladwell served as the master of ceremonies.

Barbara Epler of New Directions received the Editor’s Award, which recognizes a book editor who has made an outstanding and sustained contribution to the publication of poetry or literary prose; the award was presented to Epler by poet Susan Howe.

Three authors received the Barnes & Noble Writers for Writers Awards, which annually honor writers who have done significant work to nurture other writers or the broader literary community. Renowned author Margaret Atwood was honored for cofounding the Writers’ Trust of Canada, which provides more financial support to Canadian writers than any other nongovernmental organization or foundation in Canada. Poet Cheryl Boyce-Taylor was recognized for founding Calypso Muse and for her efforts to strengthen the community of Caribbean American poets in New York City. Novelist Christopher Castellani was honored for his service to Boston’s GrubStreet, one of the nation’s leading creative writing centers, where he is currently artistic director.

In his remarks, Castellani captured the spirit of the evening when he thanked attendees for supporting and celebrating writers, especially those “who work without promise or expectation of reward, or whose voices are unheard, ignored, or suppressed.” He went on to say, “What I often hear, often from fellow writers, is: Too many books get published already; too many people want to write; why encourage them? I call this literary Calvinism, the belief that only a precious few of us are born Elect, while the rest are barred from the life of the mind…. I’ve never been much for Calvinism in any form, or for that kind of snobbery. I admire any writer who works hard to get better by studying and practicing and questioning the art, who says yes to other writers, who doesn’t equate stinginess with seriousness.”