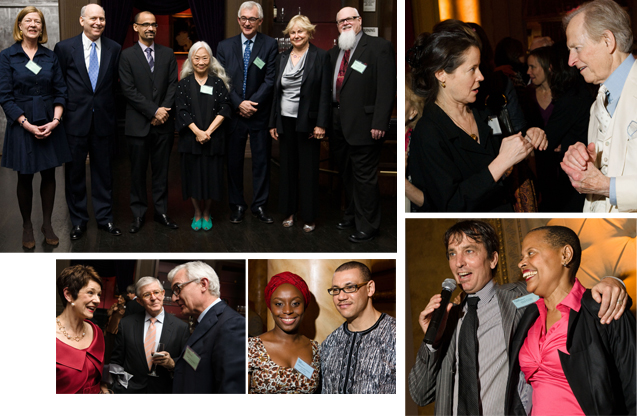 On March 18, nearly four hundred writers, publishers, editors, agents, and other members of the literary community attended the annual Poets & Writers benefit dinner at Capitale in New York City. As part of the evening's program, the Barnes & Noble Writers for Writers Award was presented to three writers—Junot Díaz, Maxine Hong Kingston, and M. L. Liebler—for their work on behalf of other writers. In addition, the second annual Editor's Award was given to Pat Strachan of Little, Brown. The master of ceremonies was humorist Dave Barry, and awards were presented by Susan Isaacs, chair of the Poets & Writers Board of Directors. Galen Williams, founder of Poets & Writers, was also recognized on the occasion of the organization's fortieth anniversary. Following dinner, the celebration continued at an after party hosted by Nick Flynn, Rivka Galchen, and Sapphire. This year's dinner chair was John Makinson of Penguin Group, a provider of underwriting for the event along with Arvato Print USA, Barnes & Noble Booksellers, Hachette Book Group, and Theodore C. Rogers. Proceeds of funds raised by the benefit support P&W's programs such as Readings/Workshops and its Web site, pw.org.