On April 26, Jody Bolz and E. Ethelbert Miller joined Michael Collier, Linda Pastan, and more than a hundred other poets and poetry fans to celebrate the 130th anniversary of Poet Lore, the oldest poetry magazine in the country. Published by the Writer’s Center in Bethesda, Maryland, the biannual journal has shared with readers the work of some of the poetry world’s biggest names, including Alice Fulton, Sharon Olds, Carl Phillips, and Mary Oliver. While the anniversary event, held at the Writer’s Center, included a celebration of a new issue (Volume 114, Number 1/2), it also served as a farewell party for Bolz and Miller, who stepped down as the journal’s executive editors. “We were honored to serve as the magazine’s executive editors for seventeen years,” Bolz says. “Our goal has always been to celebrate the journal’s singular history while carrying its mission of discovery forward in the 21st century. We hope that the exceptional writing within the volumes we produced will be of interest to readers and scholars for decades to come.” A search for a new executive editor is underway. Below is Bolz and Miller’s farewell editor’s note from the most recent issue. 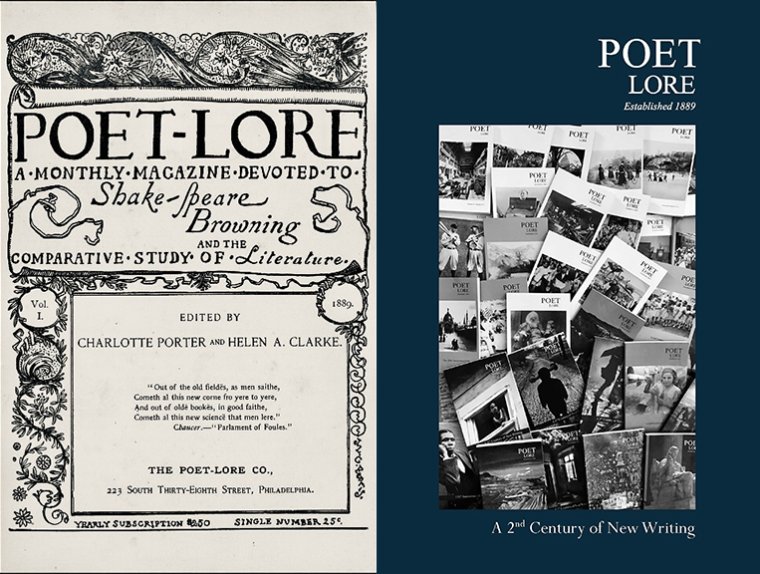 The first issue of Poet Lore, released in 1889, and the most recent issue—the final one edited by Jody Bolz and E. Ethelbert Miller, who stepped down as executive editors after seventeen years.

Poetry is worth nothing—and everything. As a commodity, it has so little value in our culture that one can steal it without fear of legal consequences. Yet we seek it at the most consequential moments in our lives, reading it at naming ceremonies and coming-of-age celebrations, at weddings and funerals.

Editing a print poetry journal draws one close to both truths. The task itself is both unprofitable and immeasurably enriching. During our seventeen-year tenure at Poet Lore, which draws to a close with this issue, we’ve had the opportunity to select, edit, and publish more than 3,000 pages of poetry. We’re grateful for the experience, which allowed us to work closely with so many gifted writers.

When Helen Clarke and Charlotte Porter founded Poet Lore in 1889, they described their aesthetic goal with humility and ardor. They acknowledged the “mystery of beauty” and wrote: “The heart of it cannot be plucked out by any editor or commentator. The approach to it…is a path one may search for as well as chance upon.”

How does one approach a mystery? We began by reviewing each submission without regard to reputation, seeking poems that ambushed us—musical language with the urgency of direct address. To test our instincts at editorial meetings, we read the work we’d selected for discussion aloud, listening for a sound that’s hard to describe but easy to discern. If a poem fell short in ways we could address, we corresponded with the poet, opening a discussion that was detailed and expansive.

Looking through the thirty-five issues of Poet Lore we’ve edited, we’re proud to note several changes in the journal. With coeditor Rick Cannon, who guided our work until his departure in 2006, we decided to use old photos on the cover, featuring images from the late 1900s at first to emphasize the magazine’s history. We reinstated an editors’ note to invite readers into each issue. Taking the cover photo as a starting point, we explored a topic of interest (border-crossing, protest, climate change), linking it to poems that followed, which we arranged thematically—creating a conversation across the pages.

A year later, we inaugurated “Poets Introducing Poets,” in which an established poet introduced poems by a writer new to our pages. Tony Hoagland began the series by presenting the work of Adrian Blevins in 2003. Other featured poets included: Gregory Pardlo (2008), who won the Pulitzer Prize in Poetry for Digest seven years later; Inupiaq-Inuit poet d g nanouk okpik (2010), author of Corpse Whale; and Tarfia Faizullah (2013), whose second book, Registers of Illuminated Villages, came out last year.

It took us longer to reengage the magazine in the essential work of translation. Poet Lore’s founders had made it their mission to present world writers to American readers who may never have heard their names. Among these were such luminaries as Frederic Mistral, whose poetry appeared in Poet Lore in 1890, fourteen years before he shared the Nobel Prize in Literature with another Poet Lore author, José Echegaray; Rainer Maria Rilke; Paul Verlaine; Rabindranath Tagore (a Nobelist in 1913); along with Henrik Ibsen, August Strindberg, and Anton Chekhov, whose plays appeared in full. In its first two decades, Poet Lore published translations from scores of languages, including Icelandic, Gaelic, Yiddish, Armenian, Bengali, and Chinese.

At the advice of translator Kyle Semmel, we opted for depth over breadth, choosing to publish an annual portfolio of poems by a single poet, rendered in English by a trusted translator. In 2012, we launched “World Poets in Translation” with Thomas E. Kennedy’s translations of Danish poet Dan Turèll, whose expansive, jazz-inspired work held special appeal for American readers. After that success, we invited Suzanne Zweizig to join our staff as translation editor. Thanks to her, Poet Lore has since showcased work by Melih Cevdet Anday (Turkey), U Tin Moe (Myanmar), Rira Abbasi (Iran), Idea Vilariño (Paraguay), Anas Atkora (Togo), Ilja Kostovski (Macedonia), and Nadia Anjuman (Afghanistan).

Along with translation, Poet Lore was known from the beginning for its critical writing. On that front, our talented review editor, Jean Nordhaus, and her predecessors Gary Stein and Martin Galvin, brought our readers incisive book reviews in each issue along with occasional essays on a range of intriguing subjects, from Mary-Sherman Willis’s take on documentary poetry to Terrance Hayes on “The Poetics of Liquid.”

Poet Lore had long welcomed poetic sequences, verse narratives, and long forms. We carried the tradition forward in this century, featuring such ambitious works as Samiya Bashir’s “Coronography,” David Dominguez’s “To the Ghost of Cesar Chavez,” Leslie Ullman’s “The Transits of Saturn,” Greg Orfalea’s “Poem for the Unspeakable,” Jay Leeming’s “Mother Night,” Martha Collins’s “Broken Open,” Sherod Santos’s “I Was at One Time Close to Home,” Ben Jasnow’s “The Underworld,” and Christopher Presfield’s “Elegies for the Fallen.”

We also had the privilege of publishing many superb writers for the very first time, including Reginald Dwayne Betts, whose poem “A Different Route” appeared in Poet Lore in 2004, and Chelsea Jennings, whose prize-winning collection is reviewed in this issue. And among those whose work we published early on are Traci Brimhall, Alex Dimitrov, Alejandro Escudé, Lisa Beech Hartz, Rachel Mennies, Faisal Mohyuddin, Ladan Osman, Iain Haley Pollock, Ines P. Rivera Prosdocimi, Roger Sedarat, Tara Skurtu, and Javier Zamora.

Last year, we received a note from Shannon Spies, whose first published poem had just appeared in the magazine: “I wanted to take a moment to express my wonder and gratitude. I’ve been operating under the impression, for years now, that submitting poetry is a soul-crushing occupation that erases the personal. You’ve shown me that there is nothing more personal than taking a risk, having that risk acknowledged, and seeing one’s own, still-wanting work alongside pieces that just sing.”

These words hold the “everything” this work has meant to us. We thank The Writer’s Center for giving us the chance to play a part in Poet Lore’s history.

The oldest continuously published poetry journal in the country celebrates a landmark anniversary in September.

Poet and memoirist Meghan O’Rourke, the incoming editor of the Yale Review, discusses her approach to editing, her plans for the journal, and the trends she’s most excited about.