To get to Wonewoc, the small town in Wisconsin where novelist David Rhodes lives with his wife, Edna, one must look for signs to Highway 80, State Road 33, County Road EE, Highway Q, and other rural thoroughfares. But larger, homemade signs carrying messages like “You Must Be Born Again,” “Your Sin Separates You From God,” and “Repent—Christ Will Lift Your Burden” compete for one’s attention, propped up in the middle of fields and overgrown ditches. 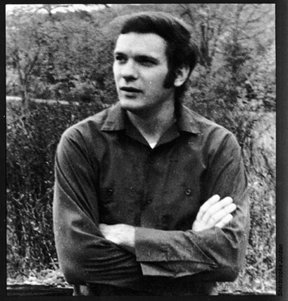 Although I grew up on a farm in Wisconsin and was familiar with this kind of spiritual advertising, the signs I found outside Wonewoc in early June did little to bolster my confidence as I headed to interview an author who, having published three successful novels in the early 1970s, was paralyzed in a motorcycle accident and slipped into a three-decade silence during which he publishing nothing. Through it all he continued to write, and Milkweed Editions, an independent publisher in Minneapolis, is releasing a new edition of his third novel, Rock Island Line, along with his new novel, Driftless, in September.

Having heard some of the details of Rhodes’s story from his editor at Milkweed, Ben Barnhart, and his publicist, Emily Cook, I knew that the novelist was exceedingly kind, not at all bitter about what had happened to him more than thirty years ago. But no amount of research or quotes from secondary sources could have prepared me for the honesty, generosity, and intellectual curiosity of the man with whom I shared an afternoon and evening. While I tried to give a sense of this in the profile “After the Flood,” which appears in the September/October issue of Poets & Writers Magazine, I was unable to quote Rhodes at length. What follows then are longer excerpts from our seven-hour conversation, during which we discussed a wide range of topics, including first impressions, fate, philosophy, religion, hunting, and, of course, writing and literature.

Did you read a lot while you were a kid? Were there a lot of books in the house?
There were a lot of books in the house. My mother was quite insistent, though neither of my parents had gone to college. My mother taught second grade and my father was a pressman at the Des Moines Register, so he was down there with the big rolls of paper and making the presses run. He worked there for a long time, until about the time I went off to boarding school. He started calling square dances—he eventually became a professional square dance caller. He’s a very charming, likeable guy, and he likes to win people over and he likes to entertain and he likes to be in front of people and sing, which he always did at family reunions. And so he and mom started square dancing and dad started listening to the callers and thought, “I could do that,” and he bought a little turntable and he taught himself how to do it and he started a little square dance club and he became very popular. Like I say, he’s a charming guy.... I learned how to play guitar from him. I played guitar in a gospel band after I broke my back for about fifteen years. I was too shy to be in front of people but I loved the music.

I don’t know quite how to say this, it seems kind of funny, but conventional Christianity, when it’s sung, works for me. They have these wonderful songs that we’d sing. I remember one of them. This woman, Joyce, she’d get up and sing and she had these big brown eyes and she just had an open face. Just a wonderful open woman, and there was this song that talked about becoming religious when you’re young, going to church with your parents. In the chorus it would say, “And everything I used to believe…” and then there would be this pause, and you’d hit this chord and you’d say, “I still do.” And it makes such a wonderful song. Now, in life it doesn’t work that way because the things you learn as a child you end up seeing through and you have to find something new, but in a lyric for a song it’s perfect. A lot of the fundamentalist religious things work so well in songs as lyrics, and it was a way that I could relate to a lot of rural religious people and we could see eye to eye.

I saw some of the signs in the fields as I was driving here. I don’t know who puts those signs in their field. You see them every once in a while in rural areas….
Well you do, and you used to see them a lot more than you do now. My mother was a preacher’s daughter and she was very religious, and I inherited a lot of those ways of looking at the world. I talk to people, and they say, “I’m not religious at all, I don’t have any spiritual inclinations, never had a spiritual experience,” and I can relate to that. And then they try to equate it with seeing something beautiful and they say, “Now is that what you mean?” Well, yes it is that, seeing something beautiful, but when you experience something in a religious mode you see something that’s beautiful but it always seems as though something else is trying to talk through it, and it’s something you can’t quite get at. In the end I view religion, most of the time, from a psychological point of view. I think we try to integrate our own experiences; our life is formed from seeing the differences between us and others and trying to form a personality either from what we like or what we dislike, and then as we get older we understand that the things we rebelled against and the things that were so difficult and painful for us as we were growing up were necessary for us in that process. There’s something in experience that needs to be redeemed.

This is what I think Proust was doing with his Remembrance of Things Past. When you go through your past and you understand it again and you see it as part of an artistic creation, then you can reclaim it in a new way, and that, in some ways, makes you whole, because the things you reject when you’re young end up haunting you. And until you can see them and the people that you ended up rejecting and hating, if you can’t find a way of seeing how important they were to you and how they helped form your character, then you’ll be left with this incomplete feeling. This is one of the things that a religious understanding works with. What we do is we project our vision of a completed person into our concept of God and we keep trying to work that out.

What did you think of the Writers’ Workshop?
I didn’t understand what I was supposed to be doing there. I can see now that what I should have been doing is making contacts and meeting people and I didn’t do any of that. I went there and I found an abandoned farmhouse and I put a roof on it and I thought, “Wow, now I can write.” I got a job at the Oakdale Alcoholic Center and I did that at night. There were classes like once a month that you could go to, and I went to those and I never saw anybody. I went to the other English classes too, but basically I just wrote. I thought, “This is the time to write,” and that’s what I did, so when I came out of there I knew a couple people, but most of them I’d never met.

The Oakdale Alcoholic Center. What drew you to that? Seems like an interesting job for a graduate student to have.
I always had to work while I was in school, so I needed to get a job. I just saw a notice in one of the university buildings and thought, “I’ll go out there and see if I can do that,” and then when I got there, unbeknownst to me, this was one of the ways in which young guys could fulfill their alternative service requirement during the Vietnam War. There were a number of conscientious objectors working there and they were from all over. A lot of the guys assumed that I was doing that as well. I was a registered AO1, conscientious objector status, ever since high school. When I was attending school in Vermont I was called up for a physical in this small town. They had no problem meeting their quota—it was kind of a working town and there were a lot of people who wanted to get in to the military. So I went in for a physical and they asked me if I had any allergies. I said I did have allergies, so they sent me to see a doctor there and I talked to him about how occasionally I would break out in hives if I got too cold, and he talked to me and he said, “Why are you so nervous?“ And I said, “I’m not nervous.” And he said, “You seem awfully nervous,” and I said, “I’m not nervous,” and he said, “Well, I’m sorry but we’re going to find you unfit for military service.” And I said, “Well, that’s okay with me.” So that was the end of that. I think basically they didn’t want to fuss around with me—they didn’t need to fuss around with me.

How did you feel about that?
I didn’t know how to feel. I didn’t really understand what happened. This was a civilian doctor who had been called in to work in the draft board, and basically I think he looked at me and thought, “You’re not good material for this. And we don’t need you so you’re gone.” Now, I don’t know, maybe I would have had a wonderful experience in the army. A lot of my friends were in Vietnam, it was a big experience for them, maybe that would have been a good experience for me, but that was over at that meeting.

After the Flood: A Profile of David Rhodes
by Kevin Larimer | Feature 9.1.08

The story of David Rhodes is punctuated by early successes and devastating losses, personal demons and unlikely angels, dogged determination and blind faith, and the next chapter begins with the triumphant return of a major American novelist... 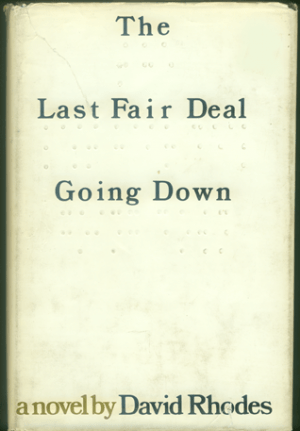 A bibliography of David Rhodes, the author of four novels, including Driftless, published this month by Milkweed Editions.

A series of photographs taken alongside the rural thoroughfares leading to Wonewoc, the small town in Wisconsin where novelist David Rhodes lives with his wife, Edna.
X