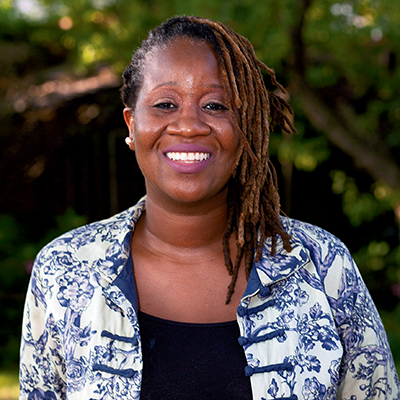 What has connected their deaths? Racism. Not even a master storyteller could have created such a seamless through line that juxtaposes a pandemic and institutionalized racism. The book critics would have said, “It’s unimaginative, too on the nose.” But Black folks have always had to stretch their imaginations beyond the realms of American reality in order to survive.

After reading their obituaries, writing my condolences on social media, and watching the protest videos in the wake of their deaths, I close my computer and continue my day, believing their stories will disappear into the turf maze of my mind. But I wake up in the middle of the night with an invisible anchor pressing into my chest.

“I can’t breathe,” I mutter to myself. Then I shout the phrase over and over again until I’m sitting up in my bed, covered in sweat. Outside, the night in this beautiful New England town stands still. Not even the nocturnal creatures alert me that life is being lived. As the words surge through my mouth again, I chomp down on my lips, fearful that my white, Trump-loving neighbors will take my nightmare as a protest song. I’m a long way from home in East Flatbush, Brooklyn, and Trinidad and Tobago. I must safeguard my body. Unable to sleep and fearful of being triggered again by another obituary, I sit in my bed biting tiny trails into my dry lips, till dawn.

As soon as the morning sunlight canvases the horizon, I go outside for my regular run. Did I tell you that I’ve started running? Girl, it’s the only thing keeping me sane. That first mile is hard—their deaths weigh me down. I have to push myself and fill my lungs with my reserved fight-or-flight breath. By the third mile, my body feels like it belongs to me again. I am content, but I fear we’ll soon forget their names. I continue running. It has taken many weeks for spring to arrive in New England, but now the red maple, American sycamore, and sassafras trees blossom on the streets and running trails. Despite the Confederate and Trump flags bellowing at full staff, the landscape is convincingly beautiful. As my lungs attempt to give up on my last mile, I suck in more air to breathe again. I run longer and faster than I ever have.

After my run I sit at my desk, drink coffee, and read the daily news, where I learn about Ahmaud Arbery’s murder. He was running in a neighborhood similar to mine—middle-class, very white, with deep roots of exclusion. His skin was brown like the bark of trees, as if nature replicated his vibrant hue. And yet, and yet, when he ran among himself, those white men decided he did not belong among nature.

Since Arbery’s murder, I’ve packed my running shoes into my moving boxes. In three weeks I’ll be moving back to New York City. I’ve been weeping and folding into sadness and depression. All of this pain does not belong to me; it’s intergenerational. It’s the result of institutionalized racism and its lasting trauma.

Let me digress for a second. The fact that I’m writing you a letter discussing the plague of racism and I’m not gushing about my new job in New Jersey is a direct result of the trauma of racism. As I write this I realize that the Black body is always trying to breathe. Currently it’s fighting against the blunt forces of police brutality and COVID-19.

I keep thinking about Rana Zoe Mungin’s death. She was denied coronavirus testing twice, despite showing all the symptoms of the virus. Mungin was not tested because of racial disparities in health care. They refused to see her pain as when they refused to see Shalon Irving’s pain, who later died from complications of childbirth. On the third attempt Mungin was finally accepted into emergency care. A few weeks later, this writer, this sister, this friend, this educator, and this embodiment of Black Girl Magic died. Who will finish her novel? Who will tell the stories of Black folks living in East New York, Brooklyn?

On second thought maybe a master writer like Octavia E. Butler or Nalo Hopkinson or Sheree Renée Thomas could have created a story about the cyclical nature of racism highlighting the convergence of police brutality and poor health care. But it might not have been published. Where do Black folks put all this pain? Where do we put all our anger? How can we escape all these cycles? Why are we dying while white Americans turn their backs on us?

When I was younger I had a recurring nightmare in which I was stuck on the same street where my father took his final breath. I was always wearing the same white dress I wore at his funeral. The streets were always deserted. In my nightmare I would see his car accident ahead but be too terrified to approach. I spent seven years inside of this nightmare because I was afraid to acknowledge his death. But each night my father called me to bear witness. The nightmare ended when I approached my father’s limp body, and I created a makeshift memorial at the scene of the accident. I had to remember his life and yet move beyond the pain of his death, in order for me to progress in life.  We are on the cusp of an anti-racist future, and we cannot let enablers of America’s racism stall our progress. Otherwise the dead—Sandra Bland, Sha-Asia Washington, Botham Jean, and others—will whisper in our ears at night. They’ll keep us sleepless until we do something.

Tayari, can you believe I have been writing you this letter for five months? I’d start and then the triage of Black pain would prevent me from writing. My therapist told me to sit with the pain until it leaves my belly—this is where I carry all of my angst. I’m writing the last few paragraphs of this letter from my new digs in Crown Heights, Brooklyn. As soon as I drove away from that rural New England town where I had lived for three years, I knew I was not going to miss it. It’s beautiful, it’s lush, it’s quiet, it’s clean, and it’s serene. But it upholds this figment of America that many white people have endangered Black bodies to maintain. In the countryside the white American dreamscape version of America matters because it allows them to view racism and Black pain as pathological.

In my new neighborhood, Black Lives Matter. The rallying call is posted outside shop windows, bedroom windows. It’s even painted on the road. Outside, some of my neighbors are slapping their dominoes on the wooden table, the kids are playing tag and erupting in giggles whenever someone is caught; some guy is walking up and down the street puffing on his hookah, and my landlord who lives downstairs is playing classic soul music. This is unadulterated Black joy. This is the joy that I craved when I lived in New England, and now, every day, I breathe in this beauty.

Leslie-Ann Murray is a writer from Trinidad and Tobago who grew up in Brooklyn, New York. She started Brown Girl Book Lover, a blog that celebrates diverse writers, their stories, and the inescapable beauty of literature.