Jen Michalski lives in Baltimore. Her second novel, The Summer She Was Under Water, is forthcoming August 2016 from Queens Ferry Press. She lives with a Boston Terrier and a human named Phuong. 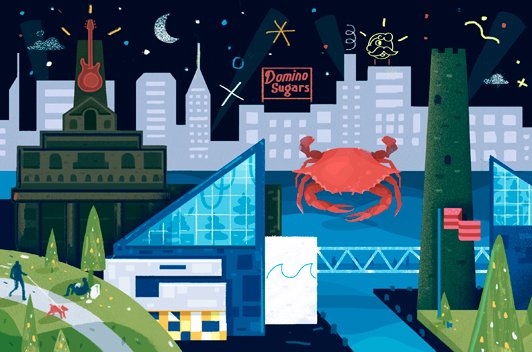 “Baltimore is warm but pleasant...I belong here, where everything is civilized and gay and rotted and polite.”― F. Scott Fitzgerald

Fitzgerald’s famous quote about Baltimore might convey a town of Southern Gothic leanings to outsiders, but as a Baltimorean, I think it means that you can stroll through a neighborhood of stately, preserved brownstones while watching a rat leisurely cross the sidewalk. Or visit the Patterson Park Observatory (called the Pagoda by locals because its Victorian design is often mistaken for Asian) and throw away a box of fried chicken someone left behind on its steps. Like an imperfect gemstone, Baltimore’s real value lies in it being one of a kind. Established in the eighteenth century as part of the tobacco trade, Baltimore has always been known as a gritty harbor full of wharf rats and stevedores, a place where the newspaper would just as likely be used for fish-wrap as for reading.

Yet what’s more impressive to me is the number of writers who currently call Maryland home—transplants from New York City, Washington D.C., California, and even Canada, enshrouded in the halls of our numerous writing programs, living in the city itself or in the suburbs of Towson and Annapolis, sometimes even in the mountains of western Maryland. Whether one is a writer or a reader, it’s hard not be drawn to what I call our “country in a state”—our fine-sand seashores, our Appalachian mountain ridges and wintertime skiing, our golden-ribbed farmland on the Eastern shore, flush with corn and tomatoes, cherries and peaches, and our majestic Chesapeake Bay, where sailboats glide across the sunset and where Francis Scott Key, imprisoned at Fort McHenry during the War of 1812, penned “The Star-Spangled Banner.” We are famous for our seafood (steamed crabs, anyone?) and even more famous for our embattled neighborhoods (exposed to you courtesy of the critically acclaimed television series The Wire). But what I’ve found in my twenty years here has been a little city with a big heart, with scattered, pulsing arteries of ideas and talent that have finally connected to put us on the map.

Baltimore thrives on cooperation, not competition. We draw together based on our underdog status: We’re not northern or southern (during the Civil War, we didn’t secede from the union although we rebelled against them), and for years we were but a rest stop between New York City and Washington D.C. We’re ferociously proud of our confused identify, in a “whatever you aren’t, we are” sort of way. Baltimore is a town for reinvention, a place where you can be yourself, a place that if you see a need for something, well, just do it, and let us know if you need help.

When I graduated with a master’s degree in writing from Towson University, I did just that, starting the literary journal jmww. I wanted to stay in touch with my circle of friends at school and didn’t know of any other way (although I suppose, in retrospect, monthly potlucks would have been easier). Another Towson alum, Catherine Harrison, and I were its first editors, and in our debut issue we ran three stories—one from me, one from Catherine, and our only other submission.

Through jmww I met Baltimore Sun columnist, author, and Wire staff writer Rafael Alvarez. He lived in the neighborhood next to mine, Greektown, and often hosted book parties for his author friends in his basement. In exchange for buying books, we were treated to pans of his father’s lasagna, jugs of wine, and great company. I met Gregg Wilhelm, founder of CityLit Project, at one such dinner. After having a few beers at a local bar, Gregg and I concocted an idea for a monthly rotating writer’s happy hour and placed a modest ad in the local weekly, the Baltimore City Paper. If ten people showed up, we would be pleased.

More than fifty writers attended that first happy hour. I’ve since met at least a couple hundred working writers from Baltimore, south to Annapolis and Washington, D.C., and west to Gaithersburg. I’ve been in writers groups with them, participated in readings with them, and socialized with them over dinners and drinks. Many are on co-ed sports teams together, run other literary journals and reading series, and a few run their own presses. I consider them my second family, and I don’t think I’d be the writer I am without them.

But why are we here, in Baltimore, Maryland? Surely, the writing programs play a big part. Traditional programs abound, like University of Maryland and Johns Hopkins, and others, like Loyola College and University of Baltimore, have innovative classes in publishing in which students acquire, design, and sell books (Loyola even has its own publishing house, Apprentice House). And then there are the festivals. Every September the Baltimore Book Festival, which features programming from the CityLit Project, takes place at the picturesque Inner Harbor (to some, Baltimore’s crown jewel for tourists), and the CityLit Festival, held Saturday every April at the University of Baltimore uptown, has welcomed Junot Díaz, Jaimy Gordon, Edward P. Jones, Jhumpa Lahiri, and George Saunders. This year’s special guest was Claudia Rankine, and featured authors included Paul Lisicky and D. Watkins. Western and Southern Maryland also have gotten in the act, with the Gaithersburg Book Festival and the Chesapeake Writers’ Conference at St. Mary’s College of Maryland, along with the Bethesda Literary Festival and the Annapolis Book Festival.

Jen Michalski's wonderful tour of literary Baltimore captures this odd city's charm and energy. The literay community and all the events offered in Baltimore are as rich as its many choices of ethnic cuisines. I can't imagine living anywhere else. There must be something in the water that has inspired so many Baltimoreans to take up the penn, and Jen has described it well.

I love this delightful picture of Baltimore. It presents such a colorful tapestry of the characteristics that make Baltimore the place to live. It has the food, theatre, dance, bookstores, readings, libraries (Oh, for joy, the Libraries), the Harbor, and a perfect combination of the old, the new, and the to be hoped for!