An Open Door: A Profile of Richard Russo

The rolling tables stacked with books that normally fill the floor at Longfellow Books in Portland, Maine, have been pushed to the walls. A brightly colored collection of worn wooden chairs has been arranged in rows and the podium set up. An enthusiastic, standing-room-only crowd has gathered for a group reading organized by Slice magazine. 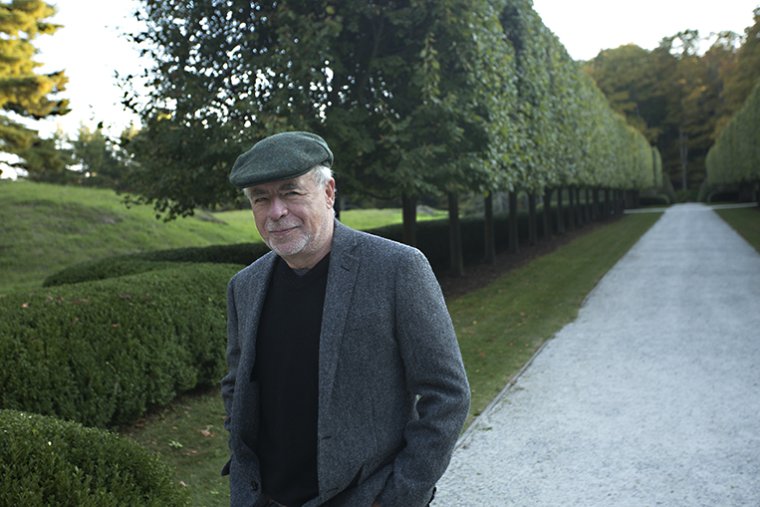 Slice cofounder Celia Johnson introduces CJ Hauser, who is in town reading from her debut novel, The From-Aways (William Morrow, 2014); to be followed by Justin Taylor, visiting from New York; and finally, hometown heroes Douglas W. Milliken and Mira Ptacin.

Near the back of the room, Richard Russo takes in the scene and smiles his bright-eyed smile. In the shoulder-to-shoulder hubbub, many seem to have missed the Pulitzer Prize–winning author, who had walked the few blocks from his house and arrived early. While the evening’s organizers scurried about making final preparations, Russo grabbed small stacks of chairs and helped set them out. The gesture seemed quintessentially Russo: The humble, blue-collar kid from a hardscrabble mill town is still very much alive and thriving within the sixty-six-year-old award-winning author who has made stories of the haves and have-nots his life work.

Later, an audience member’s dog—perhaps overwhelmed by the room’s swelling mugginess or too many handouts of half-eaten cookies—trots up beside the podium while Hauser is mid-reading and promptly deposits a puddle of vomit on the carpet. The crowd erupts with startled laughter. It feels like a moment straight out of a Richard Russo novel.

Russo has lived in Maine since the early 1990s, when he arrived to teach at Colby College in Waterville. After retiring, he settled in Portland with Barbara, his wife of more than forty years; their adult daughters, Emily and Kate, live nearby.

Ensconced in an overstuffed couch in the den of his handsome brick town house, circa-1817, Russo is relaxed as he discusses a publishing career begun more than thirty years ago. The phone has been ringing all morning but he is happy to discuss the arrival of Everybody’s Fool, published in May by Knopf, the much-anticipated sequel to his beloved 1993 novel, Nobody’s Fool (Random House). He laughs often, and infectiously, as he talks.

While friends, fellow writers, agents, editors, and booksellers frequently describe him as decent, generous, and hardworking, Russo has also become a statesman of American letters, the author of eight novels, two story collections, a stand-alone novella, a memoir, and more than half a dozen screenplays. He is revered for writing fiction set against the backdrop of declining mill towns while consistently drawing hilarity from his characters’ pathos; his wonderfully unhurried novels brim with wry humor and ruminative protagonists. Russo, called “the patron saint of small-town fiction” by the Washington Post, has embraced the sentimental, comic, and occasionally satirical even while riddling his novels with the anxieties of characters heaped in foibles and frailties, all of them struggling to understand what it is they want out of life.

Russo was born in 1949, the only child of a strong-willed, neurotically controlling mother and an absent, ne’er-do-well father. He was raised in upstate New York, in Gloversville, a town already on the wane from its former glory as the hub of America’s glove-making industry. Unlike other family members, Russo avoided a fate in the dank dye house or at the leather-cutting bench. After high school, he left home for far-away Tucson, where he spent years at the University of Arizona earning his bachelor’s degree, MFA, and, finally, a PhD in American literature. Little did he know when he fled Gloversville that he would spend a lifetime confronting it in his imagination, reckoning with it through the prism of fictional towns he called Mohawk, North Bath, Thomaston, and, most famously, Empire Falls.

As Russo put himself through school, during summers he returned to New York and worked in road construction alongside his father. The work would prove pivotal to Russo’s then-unimagined writing life, as he spent many after-work hours drinking in local bars with his father and getting to know the man who abandoned him and his mother. It is telling of Russo’s personal optimism and capacity for generosity that even his unreliable and unavailable father becomes an acceptably irascible rapscallion in his fiction, reimagined as Sully in Nobody’s Fool and as Sam Hall in The Risk Pool (Random House, 1988), whose memorable post-drunken-brawl emergency room philosophy is: “Things get bad. It’s nothing to worry about. It doesn’t mean a thing.”

Or perhaps Russo’s grace on the page is also an expression of gratitude for the fact that things could have gone very differently in his life. “There is another Richard Russo who is still in Gloversville, sitting on a bar stool,” he once told a reporter for England’s Independent newspaper. “Someone very different. Someone angrier. Certainly not a writer. I doubt we would like each other very much.”

In Arizona, heading down the path to become a literary academic, Russo began writing in earnest. While many of his peers were rapt by the au courant experimentation of John Barth and William H. Gass, Russo fell under the influence of an older generation: He found inspiration in Charles Dickens’s large canvas, F. Scott Fitzgerald’s notion of reinvention, and Mark Twain’s exploration of darkness via humor. Russo wrote his first novel while living in Arizona and set it there, in the desert. But the fiction fell flat.

“I was trying to pretend I belonged,” he says today. “But I hadn’t found either my subject or my voice, and I had a kind of tourist’s knowledge of Tucson.”

Russo’s writing professor, Robert C. S. Downs, pointed to a single “bright spot” in the novel: forty pages of backstory set in upstate New York. Russo resisted. “I remember thinking ‘This is even worse!’ because it meant that’s who I am. I was hoping I’d be able to reinvent myself. But I realized that the place I’d been running from for a decade since I’d gone to the University of Arizona and earned all of these degrees…well, it was like I’d tried to enter the witness protection program only to be recognized immediately,” he says with a chuckle. The novel manuscript went into a drawer, and Russo went on to new work.

More than a year later, after he’d taken his first teaching job at Penn State Altoona, Russo revisited those forty pages. “I realized that if I was willing to embrace the voice and the sensibility of those pages, I was, as a writer, kind of starting over,” he says. “And I realized at that time, too, that it was the thing to do.” He was reluctant, but it was impossible to resist: Russo was going home again. The forty pages became the core of his first published novel, Mohawk.