A Novel in Five Residencies

There was a time when artists residencies were reserved for the privileged and unattached—the Truman Capotes and Flannery O’Connors of the world, those lucky few who could take off for three months at a time with no trouble at all. Increasingly, though, it seems that residencies are for the kind of artists who need them: parents who can get more done in two weeks away than a year at home, visual artists without good studio space of their own, penniless poets who sublet their apartments to residency hop. 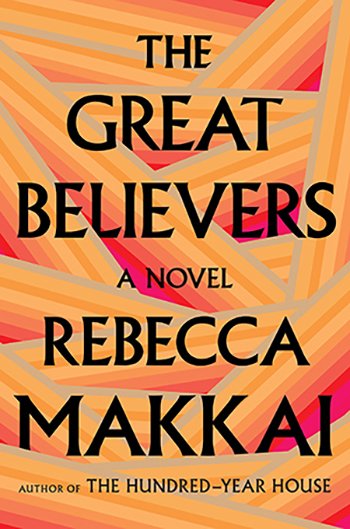 I’m in that first category. My daughters are ten and seven, but when I began my latest novel (The Great Believers, forthcoming in June from Viking), they were six and three, the youngest’s school schedule allowing me, at best, two hours of work time that I could never settle into.

The bulk of The Great Believers was written across five residencies, from 2014 to 2017. In these two- to three-week windows, I wrote the big, important pieces, the ones I could polish or add to for months afterward. I’d have finished eventually in any case, but without these five stays, I’d still be looking at a pile of notes and a hopeful Freytag pyramid.

It’s my first time at Ucross, and I’m instantly in love. I’ve stepped into a Wyoming calendar, in which wildlife troops past my window with Disney-movie regularity. There are newborn lambs, for Pete’s sake. The food is so good I gain five pounds and don’t care. (I’m one of only two residents without a mile-long bike ride from the dining hall to their studio—a disadvantage in the diet department.)

I know what I want to write, but just barely. I have an idea about an old woman who was an artists’ model in Paris around World War I. When a painting comes up for auction in the 1980s, she realizes it’s of her, and has to convince people of it. I told my husband my idea right before I left. He looked at me kindly and said, “Honey, that’s the plot of Titanic.”

So I spend a lot of time staring at what was supposed to be an outline, and revising my story collection (nitpicky edits I worry I could as easily have done in ten-minute spurts at Starbucks), and feeling unmoored. I see bald eagles—and are those antelope?—and remind myself that this marinating phase is essential too, that writing isn’t all about typing.

A week into my residency, my only studio-mate has a nervous breakdown that I talk him through, and then he’s gone; I’m alone in this building, everyone else a mile away. I edit the hell out of my stories, I write a mediocre new one about a religious cult, and I take long walks past fields of bulls, but I only write one page from the new novel, a letter from this old woman to a gallery director.

Ragdale is my most habitual residency, partly because it’s only fifteen minutes from home (it works, I swear; the key is pretending you’re on another planet), and partly because it’s so physically beautiful. Miles of prairie trails, a big old gorgeous haunted house.

I know by now that the model is secondary to my story; the novel belongs to that gallery director, Yale Tishman, a man whose life, in 1985 Chicago, is being walloped by the AIDS crisis. That one throwaway page I wrote at Ucross turned out to be the entire novel in microcosm. I start my research, and every night at dinner I have stories for the other artists about gay life in ‘80s Chicago. I make it sound fun, but the research is dark. I find, in an online personal account, a detail I know I’ll use in my novel’s final scene. It becomes a magnet for my writing, a dot on the horizon.

I can always work till dinner but need to socialize afterward, and this group excels at fireplace hangouts. I always feel guilty when I have fun (why aren’t I at home with my kids right now? Besides the fact that it’s the middle of the night?), but I’ve learned that I get more done at residencies where I feel social. In three weeks, I manage to write my first sixty pages—a real foundation. 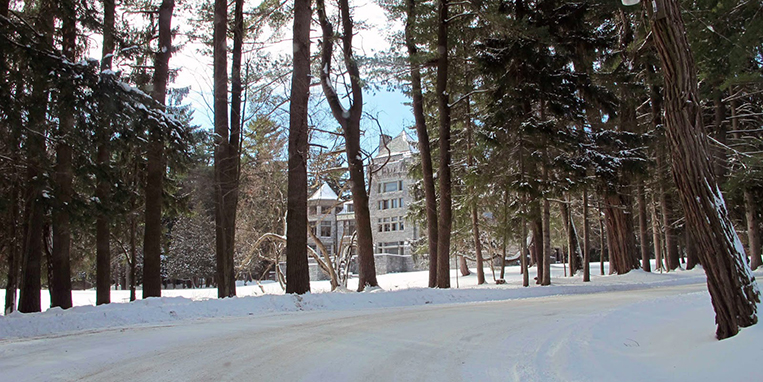 I’ve stayed at Yaddo before, but last time it was summer, with a crowd of thirty. This time there are twelve of us, with only some of the residency buildings open. There’s snow on the ground when I arrive, and it keeps falling. I’m in West House, where our windows are soon barred by icicles. I’ve been given the third-floor studio where Sylvia Plath wrote The Colossus, and I’m mindlessly entertained by the men whose legs appear out my window as they shovel the roof.

I’ve reached a crisis in my writing: I’m a straight woman born in 1978. Who the hell am I to tell this story about AIDS? It feels more and more like appropriation. A sweet performance artist stands in the West House kitchen with me for an hour, indulging my doubts and nodding patiently. There’s a minor character, a woman named Fiona whom I added on a whim, who has captured my attention—Yale cries on her one night at a party, and there’s something interesting there—and it occurs to me that maybe this is her story too. That if we move back and forth between Yale in 1985 and Fiona in 2015, I’m not just telling someone else’s story; I’m writing a complex, messy novel. It feels like an escape hatch, a cowardly move, but I want to give it a try.

And then, at what would have been the halfway point of my residency, my wonderful father-in-law suddenly passes away. I have to get home to Chicago so my husband can get to Connecticut. But we’re snowed in. I can’t even reach the Albany airport, let alone fly out of it. I’m stuck for three more days, separated from my grieving husband and children, unable to write, unable to do anything other than write. Instead of experimenting with the new sections I’d planned, I stick an unexpected death into the novel—the story is already full of sudden illness, sudden death, but this one hits my character hard—and it’s the one thing I can write well.

John Cheever’s Dutch translator is in residence at the same time, thrilled to be on Cheever’s old stomping grounds (Cheever worked for years as Yaddo’s handyman) and to be surrounded by an amount of snow he hasn’t seen in the Netherlands since his youth. He walks around taking pictures for his friends back home, writing notes to himself about the way the flakes catch the light so he can better translate Cheever’s descriptions. Watching him out my window, an adult child in the snow, is a gift of grace.

It’s going like gangbusters. The Fiona-in-2015 sections don’t seem like a chicken move anymore; the passage of thirty years, the long arm of grief, now feels like the whole point. I’m not sure what to do with her at first, but I remember that cult story I wrote at Ucross, and I pilfer it; Fiona’s daughter has disappeared into a cult. I’ve put Fiona in Paris, and I decide to see if I can write her sections in real time—if she can walk around on this day, in November 2015, if I can finish her morning by the time I have lunch. I navigate the Paris streets via Google Maps.

And I’m getting good signs from the universe. One night, I’ve filled in five answers on a New York Times crossword puzzle when I see that one is “Ian”—my first novel’s main character—and right below that are the words “Esmé” and “Sharp.” Esmé Sharp is a character in this new book. Ragdale has a notorious magic to it. I can’t quite figure out how it managed to change the crossword puzzle, but believe me: It did.

On November 13, as I’m writing about Paris on November 13, Paris is hit with a series of terrorist attacks. I’ve spent the day wandering the city in my mind, and mixed with my horror and grief is a selfish narrative crisis: The year and month are woven deep into the story. I don’t want to change the date. And I can’t use this. I have one more week, but I’ve lost my steam. I turn back and edit.

The book is under contract now, due in June. I’d love to be revising, but I’m still writing; the election hasn’t helped my concentration. We bond well as a group, my fellow residents and I, and together we block out all the inauguration coverage; together we make posters (the artists’ are prettier than the writers’) and take the train into Chicago for the Women’s March. I can’t afford to take time off, but I can’t sit around, either. It’s a gorgeous day, and in the midst of 250,000 people, our group runs into Ragdale’s beloved chef. Ragdale magic, obviously.

The day is far from a writing wash: During the march I realize that I should leave the Paris attacks in my book—that my story is, anyway, about the brutal intrusions of the world. And I realize, as we’re walking and chanting, that my character needs to make it to the historic ACT UP rally in Chicago in 1991, during which the AIDS coalition protested the American Medical Association and the insurance companies—that he needs to march through the streets shouting for his life, hopeless but galvanized.

On my last night at Ragdale, I hear my friend Todd brushing his teeth through the wall our bathrooms share—something we’ve joked about, one of the stranger realities of communal life—and I decide to stick a similar detail into my novel. It’s not as if my time at these residencies hasn’t seeped into the book enough, but I want this moment in there as a talisman. It’s one last, small reminder (if only to myself) of the connections that get us through our art, and through our lives. It’s been obvious to me for a while that my book is about community. I never want to forget how much it is also a product of community, of the generous people and places that took me in and gave my story its soul.

Rebecca Makkai is the Chicago-based author of the novels The Great Believers (forthcoming in June), The Borrower, and The Hundred-Year House, and the collection Music for Wartime—four stories from which appeared in The Best American Short Stories. The recipient of a 2014 NEA Fellowship, Rebecca has taught at the Tin House Writers' Conference and the Iowa Writers’ Workshop, and is currently on the faculty of the MFA programs at Sierra Nevada College and Northwestern University. She is the artistic director of StoryStudio Chicago. Her website is www.rebeccamakkai.com.