5 Under 35: Postcard From New York City

On Monday evening the National Book Foundation kicked off National Book Awards week in lower Manhattan with their annual 5 Under 35 celebration. Five young fiction writers, each selected by a former National Book Award winner or finalist, shared the podium to show an audience of peers and admirers—and a few critics—what American fiction has in store. 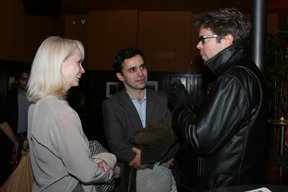 When I squeezed into the entryway of Tribeca Cinemas’ dining room fifteen minutes after the party was slated to start, the floor was already packed, the bar roaring underneath giant lit-up letters announcing LIQUORS. As I paddled through the crowd of young editors and writers, the mild sounds of DJ-for-the-night Chuck Klosterman’s pop selections wafted through the air. (Klosterman is better known for his essays on pop culture and music; his most recent book is the novel Downtown Owl, published by Scribner in September.)

Cabernet in hand, my companion and I made our way upstairs to the considerably quieter loft overlooking the saffron-hued space, and settled in on a couch beside a series of long-exposure photographs by Gautam Kansara. Against the wall to my left, a bespectacled Jonathan Franzen, who won the National Book Award in 2001 for The Corrections (Farrar, Straus and Giroux) and selected Keith Gessen, author of All the Sad Young Literary Men (Viking), as one of this year’s honorees, conferred quietly with a friend. Klosterman served up the Jackson 5’s “Stop! The Love You Save” before National Book Foundation director of programs Leslie Shipman, who described 5 Under 35 as the most fun event of National Book Awards week, and program associate Rebecca Keith took the mike to commence the reading.

Carrying the thread of effort and breakdown, the psychological acrobatics of survival, was first honoree Matthew Eck’s passage, read with tender composure, from The Farther Shore (Milkweed Editions), a novel Joshua Ferris described in his introduction of Eck as having “married clarity with confusion…as moving as it is merciless.” Eck, who served in the U.S. Army in Somalia and Haiti, read a passage in which the banter between two soldiers, entrenched in an unanticipated modern war, escalates to argument driven by one man’s bored fixation with the question, “How many men has your wife slept with?”

Gessen followed with a passage from his novel, in which the protagonist, also named Keith, makes a physical and figurative entrance into New York City. As headlights, fresh from the opposite side of the Hudson, streamed behind Gessen, I couldn’t help but think that one of those travelers might be a star-crossed twenty-something with a novel in mind on the way to forming his or her own New York story.

Sana Krazikov was up next, introduced by Francine Prose, who first met the short story writer at the Iowa Writers’ Workshop during a master class. Prose commented on the “sheer energy” of Krasikov’s characters, many of them immigrants from Georgia establishing new lives and identities in the United States, and applauded the author’s adeptness at conveying the “business of the human condition.” Unfortunately, Krasikov’s reading from One More Year (Random House) was hampered by the lack of acoustics in the packed space.

As Mary Gaitskill introduced Nam Le, the floor below emptied a bit, all of the departed missing the Australian-raised Le’s warm reading from his story collection The Boat (Knopf). He read from the story “Love and Honor and Pity and Pride and Compassion and Sacrifice,” which takes place in Iowa City, where Le, like his narrator, studied at the Iowa Writers’ Workshop. “That’s all I’ve ever done, traffic in words,” Le read. “Sometimes I still think about word counts the way a general must think about casualties.”

Final reader Fiona Maazel took the podium after Sam Lipsyte, standing in for Jim Shepard, read Shepard’s prepared introduction: “It’s hard to think of a young writer who demonstrates such equal capacities for ferocity and tenderness.” Shepard went on to call Maazel’s novel Last Last Chance (Farrar, Straus and Giroux) “mordant and ambitious, as we expect wild satire to be…. Fiona’s just flat out devastating on the narcissism of that particular American subculture of addiction and recovery.” After expressing her disbelief at Shepard’s words of praise, Maazel delivered a passage in which two of the rehab-escapee heroes of her novel interview prospective surrogate mothers for a child.

After Maazel stepped away from the mic, Jay-Z’s “99 Problems” bouncing from the speakers, New York City’s fresh-faced literati fanned out into the brisk night. Among the few remaining to enjoy the warmth and newfound breathing room were Gessen, whose expression telegraphed his graciousness, and Maazel. While I didn’t catch one glimpse of him all night, Klosterman was still there, too, in the DJ booth diligently skipping through a timeline of tunes to find that perfect last track.

Debut novelist Aravind Adiga was named the winner of the 2008 Man Booker Prize for his book The White Tiger (Atlantic) and the National Book Foundation announced the finalists for the 59th annual National Book Awards.

The National Book Foundation, sponsor of the National Book Awards, recently announced that Maxine Hong Kingston will be honored with the 2008 Medal for Distinguished Contribution to American Letters.