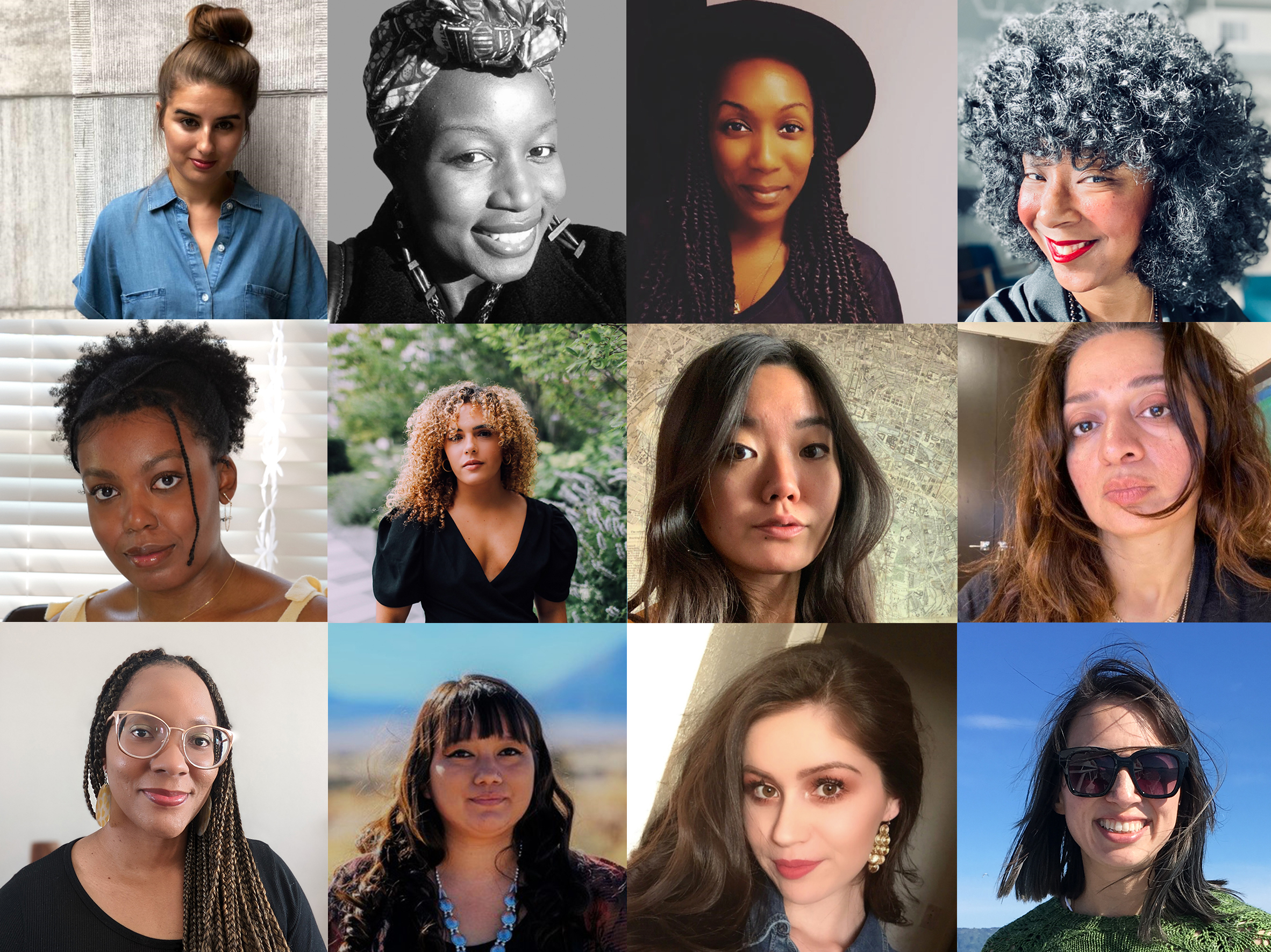 New York, NY—November 10, 2021—Poets & Writers today announced that Open Door Career Advancement Grants have been awarded to twelve women writers who are Black, Indigenous, or people of color (BIPOC). Made possible by Reese’s Book Club’s The Readership, the grants will assist writers in accessing professional opportunities.

Four grants of $1,000 and eight grants of $500 were awarded to recipients from Alaska, Arizona, Louisiana, Maryland, Massachusetts, Nevada, New York, California, Virginia, and Washington. They are writers of poetry, fiction, and creative nonfiction. Grant funds will enable them to cover application fees for MFA programs, writing contests, conferences, workshops, and residencies, or to fund travel and other expenses related to taking part in such programs. Poet Ariana Benson, one of the grantees, said, “I am immensely grateful for this support, and excited to imagine the potential doors it will open for my work.”

“We are so pleased to help these writers put their plans into action,” said Melissa Ford Gradel, executive director of Poets & Writers. “BIPOC women writers face truly daunting challenges in bringing their work into the world. These grants will afford twelve writers the opportunity to devote some extra time and resources to their writing.”

Yasmine Ameli is an Iranian American writer. Her work appears or is forthcoming in POETRY, Ploughshares, AGNI, Narrative, Black Warrior Review, and elsewhere. She teaches creative writing through the Loft Literary Center, and you can find her at yasmineameli.com and on Instagram @yasmineameli.

Arao Ameny earned her MFA at University of Baltimore in 2019. Her first published poem “Home is a Woman” appeared in The Southern Review in 2020 and won the James Olney Award. She was a finalist for Brunel International African Poetry Prize and a nominee for Best New Poets in 2021.

simóne j banks was born and raised in beautiful Pennsylvania. Her writing focuses on natural beauty, ancestral lore, belonging, and womanhood. She earned an MFA in creative writing from Louisiana State University and is working on her first collection of poetry. She lives and teaches in Louisiana.

Ariana Benson is from Chesapeake, Virginia. She received the 2020 Graybeal-Gowen Prize. Her poems appear or are forthcoming in Indiana Review, Black Warrior Review, World Literature Today,  Shenandoah, and elsewhere. Her poems explore the confluences between the natural landscape and Black histories and narratives, and all the violence and beauty that lies therein.

Isabella DeSendi is a Latina poet and educator whose work has been published in numerous journals. Her chapbook Through the New Body won the Poetry Society of America’s Chapbook Fellowship and was published in 2020. She holds an MFA in Poetry from Columbia University in New York City where she currently resides with her dog, Ziggy.

Joanna Hong is a writer and translator. Originally from Los Angeles, she speaks Korean, German, Italian, French, and Spanish. She is a PEN America 2021 Emerging Voices Fellow and is currently working on her first novel. Her work can be found on Dazed & Confused, Newsweek, The Guardian, and other outlets.

Saira Khan (@sairakhans) lives and writes in the Pacific Northwest. Her work appears in University of Chapman’s TAB: Journal of Poetry and Poetics; in Vagabonds: Anthology of the Mad Ones Volume 8 by Weasel Press; and in Diaspora Baby Blues Lit. She attended the 2021 One Story Summer Writers Conference.

DW McKinney writes and gardens in Nevada. Her work has appeared in I’m Speaking Now (Chicken Soup for the Soul, 2021), Los Angeles Review of Books, Narratively, JMWW, wigleaf, and PANK. She is an associate editor for Shenandoah and editor for Writers Resist. Say hello at dwmckinney.com.

Shaina A. Nez is a Diné mother, writer, and educator. She is Táchii’nii born for Áshįįhi. She is from Lukachukai, Arizona. Nez received her MFA in Creative Writing from the Institute of American Indian Arts. Her work has appeared in The Massachusetts Review, Tribal College Journal, Yellow Medicine Review, Woodhall Press, and elsewhere.

Delaney R. Olmo is a writer of both Indigenous and European ancestry residing in Fresno, CA. She serves as an editor for The Normal School and works as an editorial assistant for the Phillip Levine Prize. Her work has been featured in Watershed Review, Foothill Poetry Journal, Rockvale Review, and many others.

Annie Wenstrup is a MFA student at Stonecoast. She lives on the lands of the Dena People of the Lower Tanana River in Fairbanks, AK. Her work has appeared in Poetry Northwest as a finalist for the James Welch Indigenous Poetry Prize and is forthcoming in After....

Founded in 1970, Poets & Writers marked its 50th Anniversary in 2020. It is respected and trusted as the primary source of information, support, and guidance for poets, fiction writers, and creative nonfiction writers. As we begin our sixth decade, our vision is that Poets & Writers will empower writers and strengthen literary communities throughout the United States. Our mission is to foster the professional development of poets and writers, to promote communication throughout the literary community, and to help create an environment in which literature can be appreciated by the widest possible public. We are guided by our core values: service, inclusivity, integrity, and excellence. Poets & Writers is committed to becoming an antiracist organization. Learn more at pw.org.

Founded by Reese Witherspoon, Hello Sunshine is a media company that puts women at the center of every story it creates, celebrates and discovers. Hello Sunshine tells stories across all platforms—from scripted and unscripted television, feature films, animated series, podcasts, audio storytelling, and digital series—all shining a light on where women are now and helping them chart a new path forward. Hello Sunshine is also home to Reese’s Book Club and the newly launched RBC App. Fast growing in reach and influence, this community is propelled by meaningful connections with stories, authors and fellow members. Hello Sunshine acquired Sara Rea’s SKR Production to expand its unscripted content and was named the #2 Most Innovative Company in Media for 2020 by Fast Company magazine and one of Time magazine’s 100 Most Influential Companies of 2021.