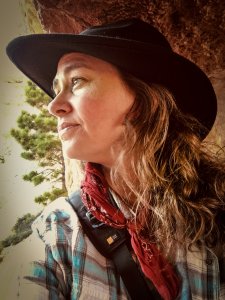 (L.M.) Leslie M. Browning is the award-winning author of twelve titles. She grew up in the small fishing village of Stonington, Connecticut. In her writing, Browning explores the confluence of the natural landscape and the interior landscape. She is a convergence of her flannel-clad New England roots and the wide-sky, high-desert of the Southwest.

Over the course of her career to date, Browning has garnered several awards, including: 5 Pushcart Prize nominations, 2 Foreword Reviews’ Awards, and the Nautilus Gold Medal for Poetry.

In 2011, she founded Homebound Publications & Divisions, which has gone on to become a leading independent publisher in the country. She has served two terms on the Board of Directors for the Independent Book Publisher’s Association and is a Fellow with the International League of Conservation Writers.

Following the release of her micro memoir, To Lose the Madness, in 2018 Leslie was invited to present at Yale University’s TEDx Conference entitled, “Uncharted” to share her own journey with successive trauma and search for transcendence in her talk, “Writing on Life.”

Browning holds an degree in Philosophy from the University of London and a Liberal Bachelor or Arts focusing on English, Psychology, and Digital Media from Harvard University.

A vagabond, Leslie’s seasonal basecamp can be found in the Berkshire Mountains & Northampton, MA areas. When not writing, or publishing the work of indie authors, she is roaming the mountains . . . which are ever-calling.

Gives readings:
Yes
Travels for readings:
Yes
Identifies as:
Disabled, LGBTQ
Prefers to work with:
Any, Illness/Wellness, LGBTQ, Naturalists/Environmentalists
Fluent in:
English
Born in:
Stonington
Raised in:
CT
Connecticut
Please note: All information in the Directory is provided by the listed writers or their representatives.
Last update: May 11, 2021
X