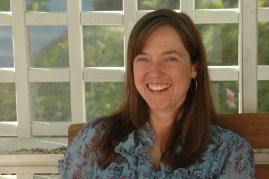 Laura Wetherington’s first book, A Map Predetermined and Chance (Fence Books 2011), was selected by C.S. Giscombe for the National Poetry Series. The Brooklyn Rail called the book “humble, folksy, romantic, tough, inventive, and not over-programmed.” She has published three chapbooks: Dick Erasures (Red Ceilings Press 2011), the collaboratively written at the intersection of 3 (Dancing Girl Press 2014), and Grief Is the Only Thing That Flies (Bateau Press 2018), which Arielle Greenberg selected for the Keel Chapbook Contest. Her poem “No one wants to be the victim no one when there is a gun involved and blue” is now an artist book created by Inge Bruggeman.

Her poetry appears in Narrative, Michigan Quarterly Review, Colorado Review, FENCE, VOLT, Anomaly (Drunken Boat), among others, and in two anthologies, The Sonnets: Translating and Rewriting Shakespeare (Nightboat Books 2012), and 60 Morning Talks (Ugly Duckling Presse 2014). Her essays and book reviews have appeared in The Volta, Hyperallergic, Full Stop, Jacket2, and 1508.

With Hannah Ensor, Wetherington co-edits textsound.org: an online journal of experimental poetry and sound. Poets & Writers named textsound an “indie innovator,” one of a small group of “groundbreaking presses and magazines that are redrawing the publishing map.” She taught publishing classes as the faculty advisor for the Sierra Nevada Review for four years and in 2014 she joined Baobab Press as their Poetry Editor.

Wetherington is a graduate of University of Michigan’s MFA program, UC Berkeley’s Undergraduate English Department, and Cabrillo College. She has taught for the French Ministry of Education, the University of Michigan, the New England Literature Program, Eastern Michigan University, and Sierra Nevada College. She currently teaches in SNC Tahoe’s low-residency MFA program. Recent grants include a 2017 & 2015 Artist Fellowship in Literary Arts from the Nevada Arts Council and a 2014 Artist Grant in Literature from the Sierra Arts Foundation. She has attended residencies at the Vermont Studio Center and Camac.

Gives readings:
Yes
Travels for readings:
Yes
Prefers to work with:
Any
Fluent in:
English, French
Born in:
Roanoke
Please note: All information in the Directory is provided by the listed writers or their representatives.
Last update: Dec 21, 2017
X