In Search of Your Own Voice: A Q&A With Poet and Editor Quincy Troupe

As editor of Black Renaissance Noire, Quincy Troupe has his eye on the entire world of art and literature by artists and writers of color. The journal, published three times a year by the Institute of African American Affairs at New York University, seeks to “address the full range of contemporary black concerns.” Since taking the reins from founding editors Manthia Diawara, Clyde Taylor, and Walter Mosley in 2003, Troupe has redesigned the journal, giving it a more contemporary and colorful look, and expanded its offerings to include a wider range of contributors. Submissions of poetry, fiction, essays, reviews, and art are open year-round via e-mail. 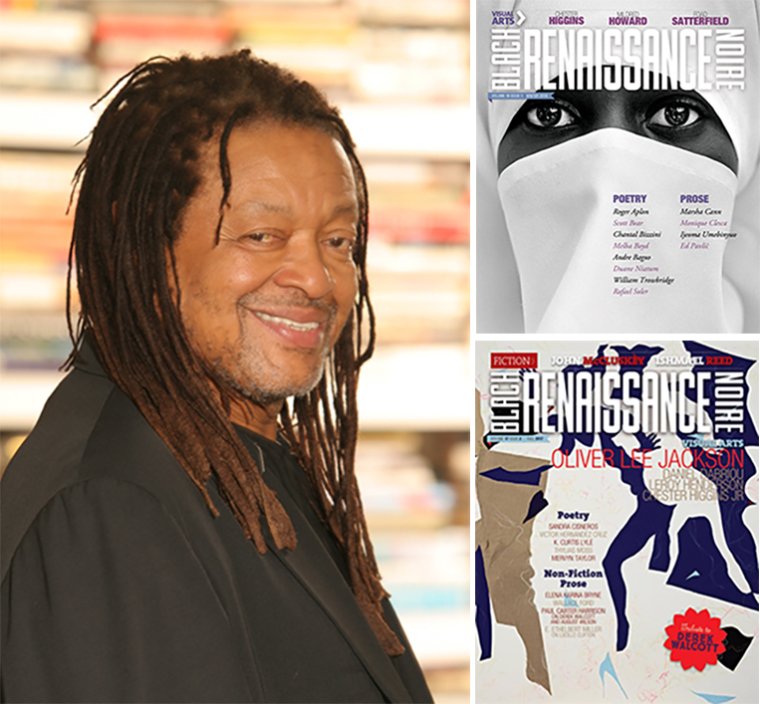 Troupe is a founding editor of Confrontation: A Journal of Third World Literature and American Rag and is the former editorial director for Code magazine. He is the author of more than ten poetry collections, including Snake-back Solos: Selected Poems 1969-1977 (Reed, Cannon & Johnson, 1979), Weather Reports: New and Selected Poems (Writers & Readers, 1991), Avalanche (Coffee House Press, 1996), and The Architecture of Language (Coffee House Press, 2006). Two new books, Ghost Voices: A Poem in Prayer and Seduction: New Poems 2013-2018, will be released in December by TriQuarterly Books. Troupe also collaborated with jazz musician Miles Davis on the book Miles: The Autobiography (Simon & Schuster, 1989) and wrote a memoir about their friendship, Miles and Me, which will be reissued in May by Seven Stories Press.

The Winter 2018 issue of Black Renaissance Noire—which was released on March 23 with a launch party featuring readings by contributors Melba Joyce Boyd, Monique Clesca, and Duane Niatum—includes an excerpt of Ed Pavlić’s forthcoming novel, Another Kind of Madness (Milkweed Editions, 2018), short stories by Ijeoma Umebinyuo and Marsha Cann, and poems by Roger Aplon, Scott Bear, and Rafael Soler. Troupe recently discussed the evolution of the journal and the importance of publishing new and emerging writers.

How has Black Renaissance Noire changed since you became the editor?
I started doing it with the idea that I would change the way it looked. I immediately started to make it more of a magazine that would bring in all kinds of people of color—also Europeans and Latin Americans—because the black experience has…made a big impact on the world, culturally, through fashion, language, and artistic expression. I wanted to have all of that in every issue.

Why do you feel it’s important to include both emerging and established writers in the journal?
I’ve been an emerging writer, and I know what that is. Most people don’t give emerging writers a lot of space, especially really new writers. So I wanted to not only find emerging writers, but I also wanted to find writers who have never been published before—you know, who are really good. I’m always on the lookout for [new writers] to put in the mix, writers of all ethnicities and races, both women and men, old and young, because that gives a kind of range to the journal that it wouldn’t otherwise have. I’ve found some writers who are older and have never had a chance to be published, and their work is in our journal.

How do you think the journal fits into the current literary and political landscape?
I really don’t think about it that much. I’m always looking for emerging writers and new writers, whether they’re old or young, black, white, whatever, I’m looking for them. I have always thought of myself as being fair, honest, and curious. I want fresh ideas.

How did the current issue take shape?
I don’t really plan issues. I work ahead and the theme emerges kind of organically. This issue began with these great photographs of two women taken by Chester Higgins, who was a staff photographer for the New York Times for nearly forty years and has a forthcoming book of photographs capturing monuments and historical sites along the River Nile. I knew I wanted his photograph “Muslim Woman” to be on the cover. And since the issue would be coming out in March, Women’s History Month, I thought that would be fabulous as a tribute.

When I was writing “My Take,” which I call my quarterly rant, two really good friends of mine, artist Jack Whitten and musician Hugh Masekela, died. Both had been previously featured in issues of Black Renaissance Noire. Jack Whitten, a renowned abstract painter, shared one of his paintings for the cover of the Fall 2016 issue and his lecture at the Institute of Fine Arts at New York University, “The Refactoring of Painting,” was published in that issue. Hugh Masekela, a legendary South African jazz musician, allowed us to publish an excerpt of his autobiography, Still Grazing: The Musical Journey of Hugh Masekela, written with D. Michael Cheers, in the Spring/Summer 2004 issue. So, instead of writing an editorial for the current issue, I decided to put photographs of Jack and Hugh on top of a black background in memoriam since they died just three days apart in January. The issue evolved from there.

What was the launch party like?
For the receptions I try to plan everything around a theme. I wanted women to be prominent in this presentation, and I wanted different kinds of presentation. We invited journalist Monique Clesca to read from her forthcoming memoir, Celebrating My Mysteries, which reflects on her childhood in Haiti during the 1960s and the influence her grandmother has had on her writing. Artist Mildred Howard, who has taught art at Stanford and the San Francisco Art Institute, came out from the Bay Area to show her recent chine collé print series featuring portraits of women that combine found antique engravings with digital images. Chester Higgins, whose portraits of women are displayed on the front and back cover of the current issue, presented his extensive collection of photographs highlighting his exploration of historical sites along the River Nile, from his forthcoming book, Before Genesis.

Then there were the poets. Melba Joyce Boyd, who is a professor in African American Studies at Wayne State University in Detroit, shared a few of her poems that are both political and personal. Her poem “Eulogy for Detroit, 1967,” which appears in the current issue, commemorates the lives lost during the riots in Detroit over fifty years ago. Duane Niatum, a Native American poet, novelist, and playwright, read a selection of poems that highlights his own kind of mysterious, mystical voice deeply rooted in the Northwest coast landscape he grew up in. I hadn’t thought about it before, but at the reading I realized that both he and Melba received PhDs from the University of Michigan, and they bonded over that connection. So the whole theme of place and identity fit together really nicely.

What advice would you give to emerging writers, or writers who might be afraid of the submission process?
I always tell writers to go for it. Don’t be afraid to move in search of your own voice. The problem with a lot of people, when they write, is that they’re not confident at first in their voice.

I was influenced by music and visual arts, and I think a lot of writing schools can sometimes damage people because they start writing like the professor or they start writing like other people in the class—or they have a magazine that they want to publish in so they skew their work towards that, towards that kind of publication. Well, I think that’s the wrong approach. I think you should discover your own voice, whatever that is. And you move towards that, you try to hone that, and you try to strengthen that as you move down the path. Because you’re going to be changing. Your voice is going to change.

Speaking of evolving, what are your plans for the journal?
Recently I was looking at the people who have influenced me, who I read when I was coming up, and they were Pablo Neruda, César Vallejo—all men for the most part.  So now I try to buy books written by women. Sometimes you have to consciously make yourself change because ordinarily you just do the same thing over and over and over again. I want to make sure there’s more women represented in the journal, of all races and ethnicities.