In the debut episode of Ampersand, editor in chief Kevin Larimer and associate editor Melissa Faliveno preview the May/June 2015 issue of Poets & Writers Magazine, featuring a special section on Writing Contests that includes interviews and advice from nine frequent contest judges; in-depth interviews with poet Mark Doty and author Maggie Nelson; new installments of The Savvy Self-Publisher, Agent Advice, and Page One: Where New and Noteworthy Books Begin; an interview with the director of the Barnes & Noble Discover Great New Writers program, Miwa Messer; a tech report about a new video game that ask players to write in worlds inspired by British Romantic poetry; and much more.

5:40  Kevin and Melissa attend the photo shoot with Mark Doty at the award-winning poet’s Manhattan apartment, where Kevin takes advantage of a break in the action to talk to Mark about his new book, Deep Lane; the allure of gardening; the poet’s role as ambassador of the art form; Mark’s forthcoming book about Walt Whitman, What Is the Grass; and the rise of poetry in contemporary culture. “I think you see it reflected in indie music, where there’s a real interest in the individual, the one-off, the quirky, the thing that doesn’t seem assembled by a corporation,” Mark says. “I think kids sense that they are being offered a slate of marketing choices by focus groups somewhere, and that when they encounter a poet, a poem, a song, a work of art, they’re encountering something made by one person who is making her mark in time and not simply trying to sell you something that we’ve all agreed is good.”

21:30  Assistant editor Dana Isokawa reveals the hands-on video-game research that went into her article about Elegy for a Dead World, a creative-writing video game launched last December by two Boston-based indie gaming studios, Dejobaan Games and Popcannibal. “I like playing video games sometimes—I’m not an avid player, but I’ve played other games—and I know that this one is very different,” says Dana. “You don’t shoot any guns, you don’t fight any monsters, you don’t score any points. You don’t interact with any other players. It’s just you, going very slowly through this world and trying to write.”

26:15  Melissa and Dana catch up with Elizabeth McCracken just minutes after the author won the Story Prize for Thunderstruck & Other Stories. In her acceptance speech, Elizabeth thanked the editors of literary magazines who have been supportive of her work. With a throng of fans surrounding her, Elizabeth tells Dana: “Literary magazine editors are passionate about poetry and fiction in a world that theorizes that people are not that interested in short stories and poetry, and that’s amazing to me. And there are new literary magazines being founded every week, and people always say, ‘Does the world really need another literary magazine?’ And I always think, ‘Yes! It does; it needs another place where people who really love fiction and poetry and creative nonfiction and visual art can send their work and have it loved and sent out into the world.’”

30:25  Matthew Rohrer reads two poems from his new collection, Surrounded by Friends, published in April by Wave Books and included in Page One: Where New and Noteworthy Books Begin, in the May/June issue.

34:00  Finally, Benjamin Percy sings a literary rendition of a Waylon Jennings and Willie Nelson classic, “Mammas, Don’t Let Your Babies Grow Up to Be Writers,” with the Bratlanders of Northfield, Minnesota. Kevin and Melissa call Ben to talk with the author about the addition of “singer-songwriter” to his already impressive literary resume, which includes a new novel, The Dead Lands, published in April by Grand Central Publishing. For any karaoke fans who want to sing along to Ben’s musical masterpiece, you can find the lyrics here.

Ampersand: The Poets & Writers Podcast is produced by Poets & Writers, Inc., and edited and mixed by Melissa Faliveno, with help from Jonathan Walsh. Music for this episode was provided by Podington Bear and Chris Zabriskie. Comments or suggestions? E-mail editor@pw.org.

Matthew Rohrer reads five poems from his collection Surrounded By Friends, published in April by Wave Books.  Le Machine Ate Himself Le machine ate himself the card that is mineI said, and I have need of the...

Benjamin Percy, the author of five books, including the novel The Dead Lands, published in April by Grand Central Publishing, wrote and recorded this literary rendition of the Ed Bruce song "Mammas Don't Let Your Babies Grow Up to Be... 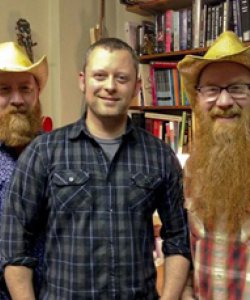 Ron Charles of the Washington Post and the Totally Hip Video Book Review series gives his insights on the ethical and practical challenges of being a book critic for a major newspaper.

The director of the Barnes & Noble Discover Great New Writers program talks about the process of searching for the “extraordinary storytelling” that makes a great new book.