The Story of Dzanc Books

On April 26, 2000, Dan Wickett posted a review of Alyson Hagy’s new novel, Keeneland, on Amazon.com. Earlier that spring, Hagy, who had been Wickett’s creative writing teacher at the University of Michigan more than a decade prior, had contacted some of her former students to tell them about her new book, and also to let them know that the first story collection of one of their classmates, What Salmon Know, by Elwood Reid, had recently been released. 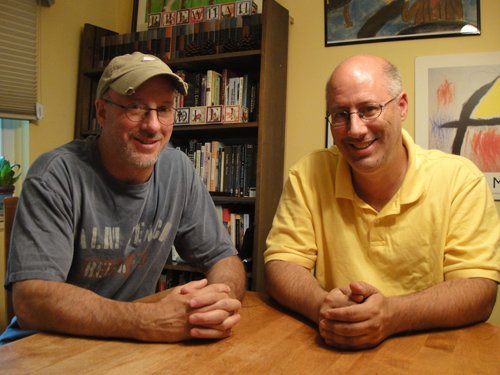 In the eleven years since that undergraduate class, Wickett had fallen away from books, particularly after his children had been born. But reading Hagy’s novel reminded him what he had loved about reading. So much so, that he decided to try his hand at his first book review. “I tried to actually write something that was newspaper worthy,” Wickett said, laughing a bit at himself. “It wasn’t.”

But soon after posting his review on Amazon.com, he realized that the only people who would read it were individuals who’d already looked up Keeneland. “The problem with Amazon reviews is that unless someone is looking at that page, no one is going to see it,” he said. “So I e-mailed it to everyone who was currently on my e-mail address book at the time—a total of twenty-one individuals: nineteen family and friends, Alyson Hagy, and Elwood Reid. After, several friends and family members wrote back to say that they really enjoyed it, and they asked if I had any further suggestions. That was foolish on their part.”

Over the next few years Wickett would accumulate an e-mail list of more than 2,800 writers, editors, agents, publicists, and avid readers of literary fiction. Plus, those original family members. With each new review that he sent, he’d receive an e-mail or two in reply from someone who was a friend-of-a-friend wanting to be added to this list. His reviewing took an equally exponential leap. “In 2000 there were probably eleven or twelve book reviews, maybe thirteen,” Wickett said. “In 2001, I went crazy. There were 103 reviews. So people started getting e-mails every three days, or two in a day. And they were getting longer and longer.”

Wickett credits Reid as one of the individuals who really helped him get noticed. Steve Yarborough was another early advocate. “He forwarded the review that I’d done of his latest book to his publicist, Caitlin Hamilton,” he recounted, “and she e-mailed me with what seemed, at the time, like a ridiculous question: ‘Would you like some free books?’ It’s no longer a ridiculous question.” In fact, Wickett now receives more than a dozen review copies every week from publishers.

Reid was also one of the key writers who encouraged Wickett to start a Web site. He felt it would not only serve as a place for him to archive his work, which in 2002 had expanded to include author interviews, but also help him expand his readership. At the time, Wickett was working as a quality control manager at a steel distribution center. But eventually a friend offered to create him a Web site, and in 2003 the Emerging Writers Network was founded. Its mission, like the goal of those very first reviews, was—and still is—to help develop a larger audience for emerging writers and established writers deserving wider recognition. And for the last seven years it has done just that. In addition to those 2,800 members who receive a newsletter now rather than e-mails from Dan, the Web site averages six thousand visitors per month. It has also become an important resource for writers, with links to literally hundreds of reviews and journals, author sites, lit blogs, bookseller blogs, and online literary journals.

The same year that Dan Wickett was sending out that first book review, Steven Gillis was living in Ann Arbor, finally writing full-time after having recently left his job at a law firm, where he’d worked as an attorney specializing in anti-trust cases. Though it had taken him years to make this leap of faith, his desire to be a writer had been with him since he was a teenager. “I went to the University of Michigan as an undergrad,” Gillis explained, “but dropped out after my sophomore year to write. This would have been the late 1970s, early ’80s. During that time I worked at Follett’s bookstore, I drove a cab—I did all these odd jobs as I was trying to become a writer. And after three years, I realized, well, there’s a reason that they call it a ‘starving artist,’ because I was, literally, starving.”

In this era of retrenchment from all things creative, lovely and life sustaining--particularly the commercialization and conglomerization of language-- one success story is a breath of clean air. Thank you.

Interesting and important it is, that the founders of Dzanc Books have skills that are agreeable to the corporate model that contributed to the production and promotion of their venture.

I note, though, that only after a known "establishment"--"Publisher's Weekly"-- gave the company a positive review were theycontacted and able to advance.

My father often said that "contact" was the most important component one could have. He meant, "contact" with someone who has the ability to assist. you. Publisher's Weekly was the "kiss of death" for my first publication. Giving my work to someone who was unqualified to evaluate it provided a devastating review, despite George Garrett, the Dean of southern writing, having given it a superlative review--and inclusion in The Dictionary of Literary Biography, Yearbook 2002.

The luck of the draw?